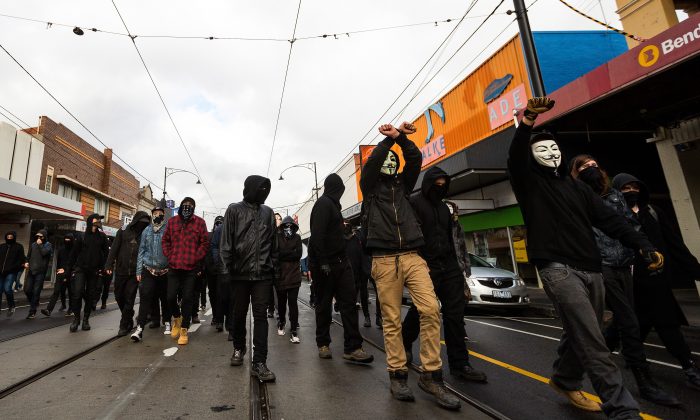 Members of ANTIFA march up Sydney Road in Coburg on May 28, 2016 in Melbourne, Australia. (Chris Hopkins/Getty Images)
US

A Change.org petition is being circulated on Friday to declare the “anti-fascist” ANTIFA organization a “terrorist organization” following violent protests at the University of California, Berkeley.

“Terrorism is, in its broadest sense, the use of intentionally indiscriminate violence as a means to create terror or fear, in order to achieve a political, religious, or ideological aim. ANTIFA have demonstrated time and time again that they’re more than willing and able to fill these criteria,” the petition reads.

As of press time on Friday afternoon, it had more than 10,000 of the 15,000 signatures needed and was rising fast.

Supporters of ANTIFA hold the opinion that fascism is an inherently violent ideology, and it has to be met with physical confrontation and peaceful protests. “We don’t think it’s useful to rehash the same old [violence versus non-violence] arguments,” NYC Antifa told the The Nation. “If Trump tries to register Muslims and engage in mass deportations, a Change.org petition is not going to stop it,” as NYU Local reported on Friday.

11 Arrests in NYU Protest at Event by Conservative Speaker

According to ANTIFA’s Facebook page, “Antifascist Action focuses on promotional, informative and practical ways of struggle against all authoritarian ideologies and groups promoting any kind of oppression, particularly against Neo-Nazism and right wing radicals.”

But some have blamed self-described ANTIFA protesters for violence that occurred during protests at UC Berkeley to shut down a scheduled event hosted by right-wing Breitbart editor Milo Yiannopoulos.

James Anderson, the editor of the website itsgoingdown.org, which promotes organizing ANTIFA, told the Guardian that “the resurgence of the far right really began in the wake of Black Lives Matter, especially Ferguson.”

He added: “Trump was another shot in the arm for them.”

“Anti-fascism has really grown in response to the far right trying to get back into the streets,” Anderson said, comparing it with the “explosion of anti-capitalist, anti-authoritarian ideas” in the Occupy Wall Street movement more than five years ago.