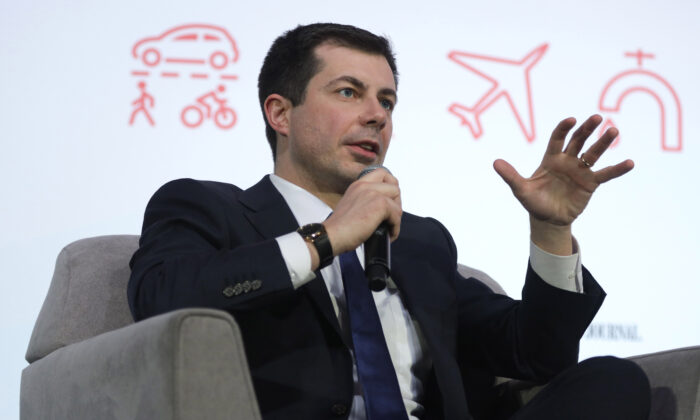 But no one yet has written about Mayor Pete’s close involvement with socialists and Marxists in his hometown of South Bend, Indiana, and beyond.

Like any Midwestern town with both an industrial base and institutions of higher education, South Bend, Indiana, has long had an active socialist presence. And Mayor Pete seemed to go out of his way to find them.

Many of the South Bend socialists gathered in the local branch of Jobs with Justice (JwJ), a radical “community organizing” group closely affiliated with the labor movement.

JwJ’s branches nationwide tend to reflect the composition of the local activist base. San Francisco JwJ for instance tends to be dominated by the Freedom Road Socialist Organization. In Washington, D.C., JwJ is more Democratic Socialists of America (DSA) heavy. Dallas JwJ has a greater Communist Party USA presence.

In South Bend, JwJ was led by personalities such as Tony Flora and Paul Mishler from the DSA and Lee Gloster, who came from a Communist Party USA and DSA background.

JwJ promotes the labor and social policies of the U.S. socialist movement—illegal immigration amnesty, the end of “right to work,” $15 per hour minimum wage, etc. JwJ is what used to be called a “communist front.”

Buttigieg began working with the local JwJ at least as early as October 2014. In April 2015, Mayor Pete served on a panel at St. Joseph County Public Library entitled “Five Myths about immigration and why we need deferred action for the parents of Americans.”

Wherever it can, the left works to introduce ID cards for illegal aliens so that they can access government services, obtain driver’s licenses, and, most importantly, vote for Democrats.

“In the fall of 2014 the Social Justice committee from the St. Adalbert’s parish started working on ideas to address concerns from parishioners who had difficulty obtaining identification. In the early 2015 the committee approached community leaders, Mayor Pete Buttigieg and common council members about the idea of a city ID program.

“With the support of Karen White from Common Council, and Mayor Pete and his staff plans began for a local identification program. Through the work of the committee, the Common Council and the Office of the Mayor, it was decided to launch an ID program through La Casa de Amistad using SF Global for verification.”

Mayor Buttigieg threw his complete weight behind this program, which effectively turned South Bend into a “sanctuary city.”

According to the Associated Press, in April 2019, Buttigieg told a New Hampshire town hall meeting that he didn’t know if he ran a “sanctuary city,” but he did know that “the police force doesn’t enforce federal immigration laws.”

“I regard us as a welcoming city. Some conservative talk show host may say that makes us a sanctuary city. I don’t know,” he said at the meeting.

“He said South Bend welcomed all people regardless of whether they are in the country legally,” AP reported. “The president thinks America is full. We’re not,” Buttigieg said, adding that “he supported a path to citizenship for the roughly 11 million illegal immigrants living in the US.”

Mayor Buttigieg also worked closely with his friend from JwJ and the local AFL-CIO, Tony Flora.

In February 2017, on the back of the Bernie Sanders movement, many of South Bend’s leftist activists coalesced into a new DSA branch—in which Flora played a leading role.

From May 2016 until February 2017, more than 300 workers at the Honeywell International Aerospace plant in South Bend were “locked out” after rejecting the company’s proposed contract.

Labor activists and socialists from all over the Midwest came to South Bend to support the locked-out workers—including Chicago-based Communist Party labor commission leader Scott Marshall.

JwJ played a role in strike support by providing some relief for the financially struggling workers. Flora was also heavily involved in the campaign, both in his capacity as the local AFL-CIO boss and presumably as a DSA comrade.

“Part of what helps the American middle class is stability, and workers need confidence that their benefits are secure,” Buttigieg said, according to the South Bend Tribune.

In July 2018, even though the lock-out was long over (the workers caved), Mayor Pete turned up to a rally outside the Honeywell offices with Carbone and Flora to attack the company.

“I stand … in support of Honeywell workers stripped of the health benefits they earned. If there’s enough cash for stock buybacks, then there is more than enough to keep this company’s promises to its retirees.”

I stand with @melforcongress in support of Honeywell workers stripped of the health benefits they earned. If there’s enough cash for stock buybacks, then there is more than enough to keep this company’s promises to its retirees. pic.twitter.com/dL9D640HmC

In April 2019, Buttigieg formally announced his run for the presidency in front of 4,000 people gathered in a re-purposed South Bend Studebaker plant. Outside the rally, Paul Mishler from JwJ and Northern Indiana DSA and a handful of others stood on a corner with a sign that read “Open your hearts to Palestine and Golan.”

According the South Bend Tribune, “Mishler said the group of peace activists wanted to push the mayor-turned-presidential-candidate to toughen his stance on Israeli–Palestinian policy, with a stronger focus on helping Palestinians.”

“He’s a kind person and has been a good mayor,” Mishler said. “I don’t agree with him on everything, but we’re out here because we want to kind of push him on foreign policy.”

J Street claims to be pro-Israel but is in fact a far-left anti-Israel organization committed to the creation of a Palestinian state—which would almost guarantee the destruction of Israel.

Unsurprisingly, J Street has been heavily infiltrated by leftists and socialists including former and current advisory board members Stanley Sheinbaum, Alan Snitow, and Michael Walzer—all at one time prominent DSA members.

While Buttigieg has worked closely with the DSA and the South Bend left, neither party has been keen to publicly embrace the other on the presidential campaign trail.

Buttigieg is running for president as a moderate progressive. He’s all on board with leftist talking points on social issues, but he’s trying to appear more moderate on fiscal issues. For instance, he has yet to embrace either the Green New Deal or Medicare for All, though both are DSA creations.

Every now and then, though, he has to touch base with his far-left roots.

Buttigieg made a campaign stop on Cape Cod on July 6, 2019, to meet with striking bus drivers before a fundraising event at the Martha’s Vineyard Regional High School.

According to the Vineyard Gazette:

“On Saturday, Mr. Buttigieg framed his understanding of the drivers’ strike within the American narrative of using organized labor to combat wage stagnation.

‘One of the reasons everyone is following your story closely right now,’ Mr. Buttigieg … told the roomful of drivers, ‘is that we have a case where at least as I understand it, there’s been a real resistance to making it possible to organize. So I’m here to hear a little bit more about what you’re up against … and to also let you know that I’m supportive, and make sure that I can understand your story so that I can share it.’”

Buttigieg posed with the strikers and promised he would share the drivers’ story on the campaign trail.

“‘I’m going to be keeping in touch, and I’m going to be looking for good news from Martha’s Vineyard and please let us know how I can be supportive,’ he said. ‘But also know that I’ll be letting others know about your story, because I think it can inspire a lot of other people in other places … hang in there’”

The eventually successful strike against the Vineyard Transit Authority was fully supported by the DSA.

“When bus drivers on Martha’s Vineyard struck at the height of the tourist season, solidarity from longtime residents, including some DSA activists, helped them win. …

“Founding DSA member and union-side labor attorney Jules Bernstein, along with DSA member Virginia Diamond and other progressive residents, helped lead the solidarity effort among residents An op-ed by Bernstein in the July 10 Martha’s Vineyard Times, under the headline ‘Union-busting lands on Martha’s Vineyard shores’ laid out a strong case for supporting the striking drivers. Management, he pointed out, seemed determined to break the strike and the union to reassert total control over working conditions.”

It’s almost inconceivable that Buttigieg didn’t know that this was a DSA-supported strike. DSA members were very much in evidence through the action, manning the picket lines and packing out the rallies. Buttigieg happily posed with leading strike supporter and DSA comrade Virginia Diamond, who also serves as president of the Northern Virginia AFL-CIO.

Is Buttigieg really just a well-meaning Liberal Democrat who just wants the best for America? Or is he his father’s son? Is he actually a “stealth socialist” who has honed the art of appearing to be whatever he needs to be to further his cause in any given situation?

Buttigieg is running to secure Joe Biden’s support base not Bernie Sanders’. Buttigieg knows that if he can win over the moderate Democrats the hard left will have little choice but to fall in line. No sense, therefore, in scaring the moderate voters by telling them what you actually believe.