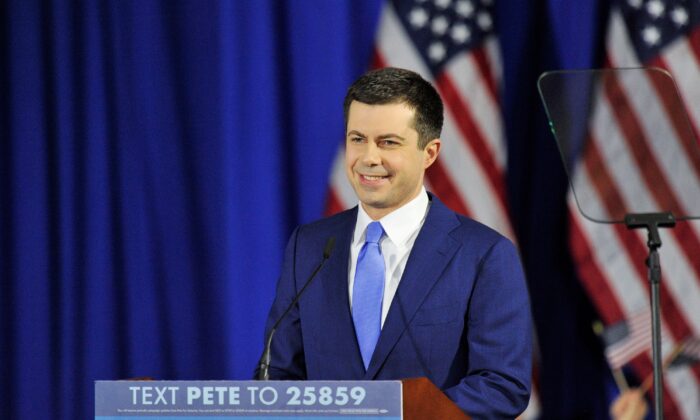 Could Mayor Pete Secretly Be More Radical Than Bernie?

After surprising performances in Iowa and New Hampshire, former South Bend, Indiana, Mayor Pete Buttigieg is being hyped as a possible “moderate lane” threat to a Sen. Bernie Sanders nomination. Indeed, the clearly politically talented Buttigieg is, as of now, ahead in the delegate count.

But is he really a moderate? Could he actually be as radical as Sanders or (gasp!) even further left?

While many are skeptical of his limited experience as mayor of a small city, few have bored down ideologically, let alone asked that question.

This is perplexing considering Buttigieg is what we used to call a “red diaper baby” (born into a communist family).

Yes, being a red diaper baby doesn’t mean you are red yourself. Many have gone in the other direction, David Horowitz being a well-known example. But the old conundrum remains: How far has the apple fallen from the tree?

In the case of Buttigieg, that tree was his father Joseph Buttigieg, who died shortly before his son announced for the presidency. Who was Joseph? The Washington Examiner wrote back in April 2019:

“The father of Democratic presidential hopeful Pete Buttigieg was a Marxist professor who spoke fondly of the Communist Manifesto and dedicated a significant portion of his academic career to the work of Italian Communist Party founder Antonio Gramsci, an associate of Vladimir Lenin.”

Father’s interest in Gramsci was more than a mild, “academic” one:

“[Joseph] Buttigieg was a founding member and president of the International Gramsci Society, an organization that aims to ‘facilitate communication and the exchange of information among the very large number of individuals from all over the world who are interested in Antonio Gramsci’s life and work and in the presence of his thought in contemporary culture.’”

There’s plenty more in that article that was, not surprisingly, largely ignored by the mainstream media. Part of that may be due to Gramsci’s relative obscurity to the American public, even though his ideas have permeated our society to a remarkable extent. There are few political thinkers more important in our time.

So just who was Antonio Gramsci? The Italian Marxist was among those Leninists who were frustrated by the slow pace the recalcitrant “workers of the world” were taking in “throwing off their chains.” He theorized the better approach to revolution, to an ideal communist society, was through the careful organization and efforts of what we now call “elites.” Revolution should be top down.

Gramsci called his system “the march through the institutions”—that is, the media, entertainment, the bureaucracies, the academy, and so forth.

Returning to Pete Buttigieg, ask yourself this: If you wanted to change today’s America, to bend it inexorably to socialism, scientific or not, would you choose Sanders’s conventional, in-your-face, “workers of the world unite” method or a more subtle approach that involved slowly co-opting the institutions of our country, from the educational system to, sadly, religion?

I don’t think it takes a genius to say that the latter would be more effective—and ultimately scarier—given the way our advanced and affluent society functions. Sanders, even if he wins the nomination, would be too easily rejected with his fusty Eugene V. Debs style by the larger electorate, possibly disastrously.

The Democrats know this, as most of us do, and so are preparing to select a leader of the moderate lane. As of now, that’s between Michael Bloomberg, Sen. Amy Klobuchar, and Buttigieg, with Joe Biden having faded quickly.

But no one seems to be asking seriously whether Buttigieg—who wrote an essay in praise of Sanders when Buttigieg was still in high school—is indeed moderate, let alone whether he’s a Gramscian like his dad.

Someone ought to do it now to avoid some highly unpleasant surprises later.

Roger L. Simon, Epoch Times senior political analyst, is a prize-winning novelist and an Academy Award-nominated screenwriter. His latest book is the seriocomic “The GOAT,” set in the world of big-time tennis.