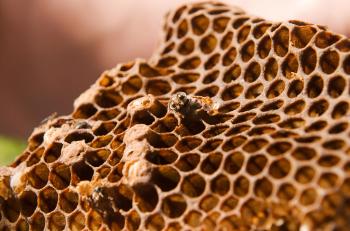 PET INSURANCE: The most unusual pet insurance claim was handed out to a Labrador that ate a beehive. Unlike the beehive pictured above, the Lab ate one filled with dead bees and pesticides. (Leon Neal/AFP/Getty Images)
US

The mixture of dead bees and pesticides caused Ellie to have an ill stomach and landed her a trip to the veterinarian. She made a full recovery.

"Ellie may be a young dog, but she's already managed to eat everything from wooden toy train tracks to laptop computer keys. So the beehive in the backyard was just another culinary adventure for this insatiable pooch,” said Veterinary Pet Insurance Co. (VPI), who gave Ellie and her owners the "Hambone Award" on Monday.

Ellie won with 30 percent of the votes to get the top prize.

It was created after a VPI-insured dog got stuck in a refrigerator and ate an entire Thanksgiving ham, coming down with a mild case of hypothermia.

Coming in second was is a Border Collie named Aubie, who crashed through a window to get at a mailman.