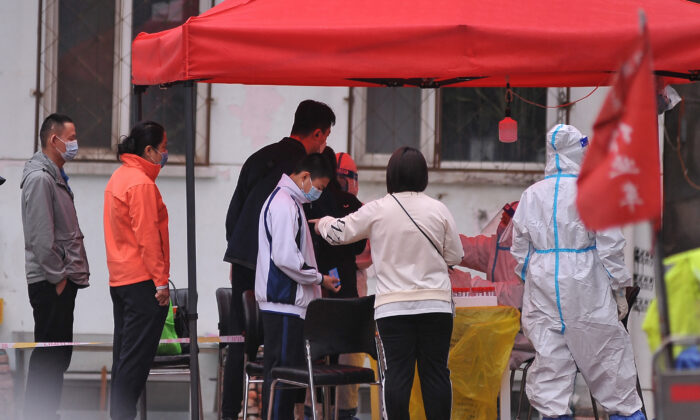 Residents queue to undergo a nucleic acid tests for the COVID-19 coronavirus in Harbin, Heilongjiang province, China, on Sept. 26, 2021. (STR/AFP/China OUT via Getty Images)
China

BEIJING—Three pet cats that tested positive for coronavirus were put down in the northeastern Chinese city of Harbin, state-backed media reported, leading to a social media backlash at what some viewed as overkill in local efforts to contain the virus.

The owner of the cats was diagnosed with COVID-19 on Sept. 21 and the local disease control agency euthanized her three cats, which also tested positive later, despite her objections, Beijing News reported late on Tuesday.

“There is probably no professional medical treatment for animals infected with the novel coronavirus,” a community worker said in an interview with Beijing News, explaining why the cats were killed.

The community worker said the cats would have continued to leave viral traces in the room.

“It doesn’t seem very realistic that the cats would contaminate the environment so badly that they would be a risk for their owner to re-contract COVID,” said Rachael Tarlinton, a virology professor at Britain’s University of Nottingham, adding that surfaces are not a major route of viral transmission.

Scientists have said there is no evidence yet that pets play a major role in spreading the virus to people.

“I firmly disagree with this approach! To put it bluntly, it’s a crude, simplistic and lazy form of management, just in order to dodge responsibility,” one social media user posted on Weibo, China’s version of Twitter.

The Beijing News report was deleted from its social media channels on Wednesday. The outlet posted a commentary on Wednesday on Weibo calling on authorities to roll out standards for how to deal with infected pets.

Feng Zijian, a researcher with the Chinese Center for Disease Control and Prevention, said pet cats should be killed if they repeatedly return positive results, according to Beijing News’ Tuesday report.

Vanessa Barrs, a professor at City University of Hong Kong specializing in animal health and disease, said the risk of transmission from infected pets to people is low.

“So far, in the whole pandemic, there have been no confirmed reports of cat to human infection, unlike the situation with farmed mink in Europe, where transmission from COVID-19 infected mink to humans occurred,” she said.

“The situation is very different for pet cats and dogs and other solutions can be implemented for animals.”