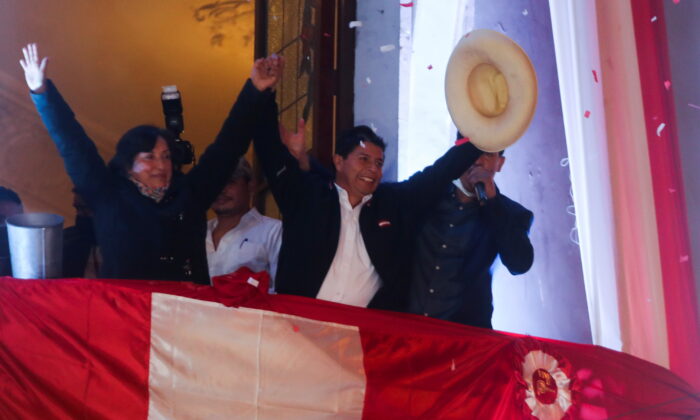 Leftist Pedro Castillo celebrates from the headquarters of the "Free Peru" party after the country's electoral authority announced him as the winner of the presidential election, in Lima, Peru, on July 19, 2021. (Sebastian Castaneda/Reuters)
Americas

Using a supreme decree that was approved on Dec. 9 and went into effect the following day, Peruvians are required to stay at home without exception. In the same order, those older than age 18 must now show proof of vaccination against the CCP (Chinese Communist Party) virus to enter any “closed spaces,” such as stores, markets, banks, or churches. Those who work face-to-face jobs with more than 10 people must also present proof of vaccination to stay employed in non-remote positions.

Fear over a potential third wave of the CCP virus, particularly the Omicron variant, is the impetus behind the decision.

The decree called the combination of holiday events and the pandemic “serious circumstances that affect people’s lives” and declared that citizens must follow what the government referred to as the “new social coexistence.”

The order went into effect three days after the Peruvian Congress voted on Castillo’s impeachment for “permanent moral incapacity.” The motion failed to be approved, garnering only 46 of the required 52 votes.

“We’re not allowed to visit family or have a meal together. How is it the holidays?” Lima resident Victoria Calderon told The Epoch Times.

Regarding the ordinance, Calderon thinks it’s too much to ask of the Peruvian people.

“You’re not allowed to set foot outside your home [on Dec. 25 or Jan. 1], even if you’re fully vaccinated,” she said.

A total of 60 percent of the country has been fully inoculated against the CCP virus, and 71.2 percent have received at least one dose of the vaccine.

“It has been two years now we can’t celebrate [in groups] or be together with our families on Christmas,” Calderon said.

In November, Peru revealed itself as the nation with the highest number of deaths from the CCP virus—per population density—in the world. The virus has killed 201,490 people in the country as of Dec. 10, according to World Health Organization data.

At present, Peru hasn’t reported a single case of the Omicron variant, which is the newest identified strain of the CCP virus.

Though the decree doesn’t outline punitive measures for violations of the order, fines for disregarding state-sanctioned pandemic restrictions have been in place since February 2021. They’re equivalent to $108 and apply if police catch you outside of your home during a mandatory quarantine.

Driving a car during curfew hours means that police can take away the vehicle and driver’s license, as well as issue a financial penalty of $1,590.

Likewise, social, recreational, cultural, or religious activities that draw a “crowd” will earn participants a $100 fine.

And while some residents are feeling the pinch of restricted access to their families for the holidays, others are more worried about the employment aspect of the ordinance.

Leon said the order considers a full CCP virus vaccination schedule to be three shots—including the booster dose—unless you were originally inoculated with the one-dose Johnson & Johnson vaccine, but that’s subject to change with little notice.

“I could be at work, have my three shots, and then randomly have my boss ask for proof of a fourth dose. If I can’t produce it [the proof], I’ll be terminated,” he said.

Labor attorney Pamela Navarro confirmed that a complete vaccination schedule against the CCP virus, according to the definition itself, includes the vaccine booster dose.

“It indicates that if you cannot work in person—because you do not have the vaccine—you can do remote work to the extent your work is compatible with remote work,” Navarro said.

“Nothing about this holiday feels joyous,” Calderon said.