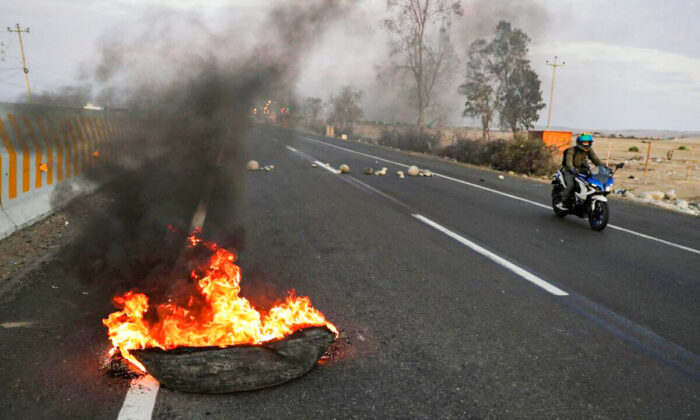 A burning tire serves as part of a blockade of a highway to Lima during a national transportation strike in Ica, Peru, on April 4, 2022. (Sebastian Castaneda/Reuters)
Americas

LIMA—Peruvian President Pedro Castillo imposed a curfew in the capital, Lima, on Tuesday, banning people from leaving their homes in an attempt to curb protests against rising fuel and fertilizer costs that have spread throughout the country.

“The cabinet has agreed to declare a ban on the mobility of citizens from 2 a.m. through 11:59 p.m. of Tuesday April 5 to protect the fundamental rights of all people,” Castillo said in an address broadcast nationwide just before midnight.

On Monday, a wave of protests against rising fuel and fertilizer prices, triggered by Russia’s invasion of Ukraine, continued into their second week, while the government scrambled to bring prices down.

The protests represent a harsh reality for the embattled presidency of leftist Pedro Castillo, a peasant farmer and school teacher who won election last year with the overwhelming support of the rural poor.

But his support has quickly waned, even in rural regions, and hovers at about 25 percent nationwide. In his eight months in office, Castillo has survived two impeachment attempts and cycled through an unprecedented number of Cabinet members.

The protests have become increasingly violent and at least four people have been killed, the government said.

On Monday, protesters burned toll booths and clashed with police near the southern city of Ica.

“This strike isn’t happening just here, it’s all over Peru,” said one protester in Ica, who declined to be identified.

The turmoil erupted last week as farmers and truckers blocked some main highways to Lima, leading to a sudden surge in food prices.

The government responded over the weekend with a proposal to forego most taxes on fuel in an attempt to lower prices, while also raising the minimum wage by about 10 percent to 1,205 soles ($332) a month.

Peru has also issued an emergency declaration for its agricultural sector due to rising fertilizer prices triggered by Western sanctions on Russia, a major exporter of potash, ammonia, urea, and other soil nutrients.

Like many countries, Peru was already battling high inflation before the war. In March, inflation hit a 26-year high, largely driven by rising fuel and food prices.

By Marcelo Rochabrun and Sebastian Castaneda