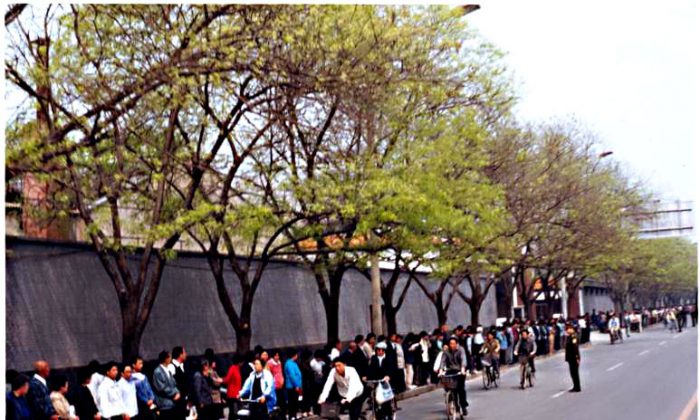 A safe environment to practice slow-motion exercises and meditate in—that was all practitioners of Falun Gong, a traditional Chinese spiritual practice, were asking for when they gathered near the Chinese leadership headquarters at Zhongnanhai on April 25, 1999.

The peaceful appeal by 10,000 practitioners, however, was seized upon by then-leader of the Chinese Communist Party (CCP) Jiang Zemin as an excuse to eventually launch the Party’s latest, and possibly most savage, persecution campaign.

Official policy hasn’t shifted since Jiang’s call to “defeat” Falun Gong 18 years ago, though the Party’s campaign is widely thought to have failed.

The Chinese regime had initially endorsed Falun Gong, also known as Falun Dafa, after it was first introduced to the public in 1992 by its founder, Mr. Li Hongzhi. Mr. Li received awards from several state organizations, including the Ministry of Public Security, for the efficacy of his qigong (energy practice) in helping the Chinese people stay healthy and for uplifting their morals.

The practice involves doing meditative exercises and living according to teachings based on the principles of truthfulness, compassion, and tolerance. It quickly spread by word of mouth, and by 1999, there were 70 million to 100 million practitioners in China, according to official and practitioner estimates.

As the number of people practicing Falun Gong became greater than the membership of the CCP, official support for the practice turned into surveillance.

Trouble had to be manufactured.

Seizing the opportunity to spin the event in his favor, Jiang Zemin framed the event as a “siege” and “the most serious political incident since June 4,” referring to the 1989 pro-democracy student protests that the regime suppressed with a bloody massacre. In a letter circulated to the Politburo on the evening of April 25, Jiang expressed fear that the “Marxism, materialism, and atheism” promoted by the CCP could not win against the teachings of Falun Gong.

In the early years of the persecution, the entire country was bombarded with hate propaganda against the group. School children faced expulsion if they refused to go along with the demonization of the practice. Chinese officials were promised wealth and promotion if they got their hands bloody.

Practitioners have been arrested for refusing to give up their faith or for telling their fellow citizens about what Falun Gong is and how it has been persecuted. Once arrested, they have been sent to extralegal labor camps or other detention facilities.

More than 200,000 lawsuits have been filed in China against Jiang Zemin for genocide and crimes against humanity.

Most have been detained without the formality of legal proceedings. Those who were hauled to court were prosecuted for distributing or possessing Falun Gong materials using a criminal law that Chinese lawyers consider vague and unconstitutional.

According to reports by human rights organizations, practitioners are usually subjected to the worst treatment among prison or labor camp inmates. Minghui.org, a clearinghouse for firsthand information about the persecution, is replete with reports of practitioners enduring medieval-style tortures, brutal beatings, and sleep deprivation. Female practitioners face sexual assaults, including gang rape by other prison inmates or guards.

Practitioners in detention also form the bulk of prisoners of conscience who organs are being harvested while they’re still alive, in order to fuel the Chinese regime’s profitable organ trade, according to a 2016 report by journalist Ethan Gutmann, former Canadian Secretary of State (Asia-Pacific) David Kilgour, and international human rights lawyer David Matas. That report estimates that each year, between 60,000 and 100,000 Chinese had their organs forcibly removed, over the period from 2000 to 2015.

The U.S. House of Representatives and the European Parliament passed resolutions strongly condemning the Chinese regime for organ harvesting.

‘Cracks in the Crackdown’

In a recent report on the state of religion in China, U.S.-based human rights organization Freedom House wrote it considers the Chinese regime’s degree of persecution of Falun Gong today to be “very high.”

But the Chinese regime hasn’t succeeded in wiping out the practice. Drawing on official Chinese documents and data from Minghui, Freedom House estimates that there are between 7 million and 10 million Falun Gong practitioners still active in China, while Falun Gong sources suggest the figure is between 20 million and 40 million.

“The simple fact that Falun Gong has survived the CCP’s onslaught is impressive and amounts to a genuine failure of the party’s repressive apparatus,” the Freedom House report says.

The report also notes that since Chinese leader Xi Jinping took office in 2012, several factors have caused “cracks in the crackdown” on Falun Gong.

Xi’s anti-corruption campaign has resulted in the purge of key officials overseeing the persecution, such as Zhou Yongkang, the former security czar, and Li Dongsheng, former head of China’s 610 Office, the Gestapo-like, extralegal anti-Falun Gong agency created by Jiang to drive the persecution.

Institutions running the persecution have been weakened. For instance, the 610 Office has undergone several leadership changes since the fall of Li Dongsheng, and was inspected for the first time by the anti-corruption agency in 2016. Also, no new anti-Falun Gong campaign has replaced the most recent one from 2013 to 2015.

A confluence of the above factors appears to be the reason that the regime’s legal apparatus has thrown out cases against arrested practitioners. This previously unheard of phenomenon, which began in late 2016, has resulted in over 17 dismissed cases by local procuratorates and courts.

The situation in the northeastern province of Liaoning, one of the most severely persecuted regions, is a case in point.

Key Liaoning official, Wang Min, the former Party chief of Liaoning, and Su Hongzhang, head of Liaoning’s Political and Legal Affairs Commission, were purged in 2015 and 2016 respectively. Wang and Su were identified by the World Organization to Investigate the Persecution of Falun Gong, a U.S.-based NGO, as being involved in cases of persecution.

Direct outreach to legal officials appeared to have played a part in the the local procuratorate rejecting the case against Li Shijin and Lin Youyan, two female practitioners from Liaoning’s Tieling County who were arrested for handing out calendars with information about Falun Gong.

Lawyers representing Li and Lin explained to legal officials that there the regime has no law banning Falun Gong, according to Minghui. Family members of the practitioners gave testimonies about the benefits of the practice to the Chinese officials. The officials then suggested the family members file a legal appeal, which later led to the case being dismissed.

When the two practitioners were in detention, they talked about Falun Gong to other inmates and the guards. According to Minghui, “everyone in the cells and guards said farewell and wished them well” after they were released on Feb. 17.

At least three other practitioners from Liaoning have had cases against them dismissed and have been released as of April 2017, according to reports on Minghui.

Yet the instances of reversal remain overshadowed by the greater incidence of persecution. Liaoning tops the list of regions where practitioners were prosecuted in March 2017, with 31 out of 110 reported cases.

Analysis: Behind the Chinese Regime’s Latest Treatment of Falun Gong

Heng He, a senior political commentator with New Tang Dynasty Television, believes that the contradictory situation that has emerged in Liaoning and other areas of China boils down to politics.

“The persecution of Falun Gong saw the rise of a huge persecutory interest group,” Heng said. “The group’s political, financial and other benefits totally depend on whether the persecution can continue or not.”

On the flipside, officials in the anti-Falun Gong machinery have “a little more space to make their own choices” in the absence of continued top-down political impetus, Heng He said. And some, perhaps sensing a shift in the wind under the Xi leadership, have chosen to instead exercise their humanity.