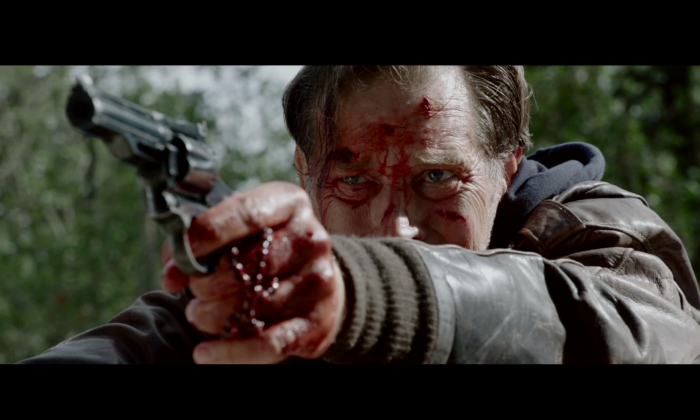 ‘Persecuted’ Will Persecute Your Patience

Have you watched “Dexter”? The HBO show about a serial killer, whose dead dad gives him advice on how to get away with murder? In “Persecuted,” the actor who plays the dead dad (James Remar) plays a pastor named John Luther. Luther’s a Jerry Falwellian-type shepherd who leads an evangelical flock called “Truth.” And who finds turning the other cheek challenging.

“Persecuted” is about the endangered religions of the world (especially the endangered American Christians). And about the American government creating an all-inclusive religion mash-up, a religion-stew stirred by a fictitious bill entitled the “Faith And Fairness Act,” to protect them. And one man’s attempt to stop it.

Oh yes. If you’re a Rabbi, you’ll be required to say nice stuff about Hinduism and Sufism and Protestantism, and let Greek Orthodox priests come in and have a go at converting your flock. That’s fair, right?

So there he is, John Luther, getting ready to address a flock, five minutes to curtain time, when up waltzes lobbying senator Donald Harrison (Bruce Davison), all corrupt and unctuous, who wants some public love for the Faith And Fairness Act.

No can do, says the rock-star evangelist. “I cannot water down the gospel to advance anyone’s political agenda.” Talk about your wooden lines. Actually, there’s a script’s worth.

Anyway, this was not the answer the senator wanted to hear. He’s a bad man. And it’s a bad administration altogether, whose bad president (James R. Higgins doing a Clinton impersonation) has the bad Secret Service kidnap our man Luther, drug him, and snap some dirty frame-job photos.

Luther wakes up and runs away. But! There just happen to be some kids partying out in the bushes who smartphone-film Luther running away.

So, of course, the rest of the movie is about getting out from under the frame-job and terminating the silly Faith And Fairness bill.

And lo and behold, Luther somehow manages to get that footage from those kids. He gives a copy to his Catholic priest dad played by Fred Thompson (actor and real-life Republican politician). Which means, of course, dad must die.

So now Luther is wandering in the wilderness. Who else do we know who wandered in the wilderness? Is that why he’s named John? Will the fact that he’s also named Luther mean he’ll perhaps nail up 95 Theses against the Faith And Fairness Act?

You bet. Luther manages, like some kind of Ninja-Turtle priest, to turn up some other opposition-incriminating footage. Puts it on Fox News.

He also shoots people. What? Shouldn’t a film about religious tolerance be showing us a man living by example? Instead, we get an image of a bloody, gun-holding hand wrapped in rosary beads. Nice!

Does John get his job back? As we used to like to say when pope John Paul II was around, “Is the pope Polish?”

James Remar’s not leading-man material, which is why he’s been in supporting roles since the 1970s.

His character’s supposed to have risen to eminence out of a quagmire of alcoholism, drugs, and abusiveness. We never see that edge. He does some violence, but it’s all half-hearted. And all the ninja-ing about is laughable.

Between the lack of convincing leadership (isn’t that why they call them “leading men”?) the silly bill, the ultra-evil government, and the ludicrous plot, if you want to persecute yourself, watch “Persecuted.”