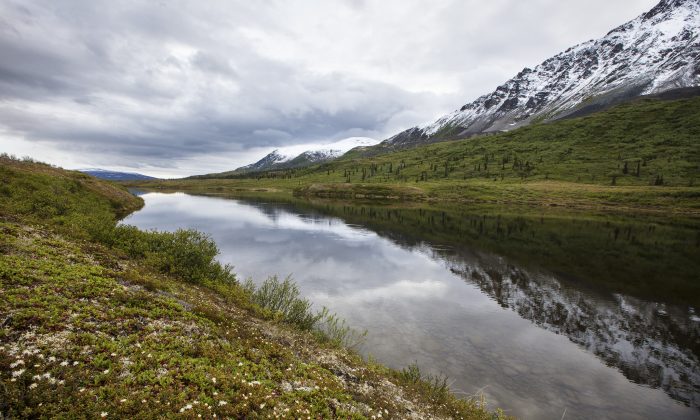 Carbon in some types of ancient permafrost is digested by greenhouse gas-producing microbes. (Bureau of Land Management/CC BY 2.0)
Environment

Global warming is accelerating the thawing of permafrost—soil that has been at or below the freezing point of water for approximately two or more years. This releases the potent greenhouse gas methane to the atmosphere.

This direct release of methane (the main component in natural gas) occurs when methane-producing bacteria consume organic matter in the rotting soil that has been stored in permafrost over the millennia. Thus, many scientists predict large releases of methane from these sources as a result of global warming.

This is likely what you have already heard about permafrost. Indeed, most of the recent news and interest about permafrost thawing is associated with Arctic and Antarctic regions, even though alpine permafrost does exist in low latitudes as well.

What you have not likely heard about concerns an interesting twist regarding a certain type of organic matter stored in permafrost, which scientists have been talking about for the past decade. It is called yedoma, and is generally defined as organic-rich (about 2 percent by mass) Pleistocene-age permafrost comprised of 50 percent to 90 percent ice, by volume. Yedoma is stored in tens to hundreds of meters of permafrost in the Arctic.

We and others have recently shown that as this permafrost thaws, yedoma is released to the surrounding soils and some gets transported by rivers from land to the Arctic Ocean.

While most scientists would have predicted that this very old organic matter would not be very digestible to modern-day organisms, such as bacteria, it turns out that it is extremely “fresh” in its composition and consequently highly bio-available to microbes.

This, it turns out, has big implications for permafrost and global warming because this process produces another greenhouse gas: carbon dioxide.

Why can modern-day organisms eat ancient organic matter in permafrost? Well, it was quickly frozen in permafrost over tens to hundreds of thousands years ago before much decay had occurred. In essence, this yedoma is like frozen vegetables, whereby fresh produce is frozen (before the onset of any decay) allowing for the retention of nutrients in a frozen state.

This is a very different way to view the processing of organic matter on Earth. “Old” stored and buried organic matter is generally viewed as being highly decomposed and having little nutrition to modern-day organisms. Yet we have found that this is not the case.

So, why should we care about yedoma? Well, we have the positive, or self-reinforcing, feedback of methane release from thawing permafrost on global warming—that is, as methane is released, it induces more warming and permafrost thawing.

In addition, now we also have a very digestible source of organic matter (yedoma) being released from thawing permafrost that bacteria quickly consume. In the process of doing so, they produce yet another greenhouse gas, carbon dioxide. Because there are high amounts of methane stored in permafrost ice, the heat-trapping potential is higher than the CO2 released from digested yedoma.

Scientists are now studying the release of yedoma more closely to better understand its overall impact on the rate of warming.

I will close with yet another interesting ramification of yedoma getting incorporated into our modern Arctic ecosystems. In a recent book by Rachel Sussman entitled “The Oldest Living Things in the World,” she covers the amazing spectrum of ages of living organisms, spanning from gastrotrich (microscopic worm-like organisms in both freshwater and marine environments) that live only three days to bacteria found in Siberian permafrost that are 600,000 to 700,000 years old.

If we now imagine large volumes of yedoma being released to terrestrial and aquatic ecosystems in the Arctic, and we know that it is efficiently incorporated at the lower food chains, it will eventually make its way up to the higher food chain, where organisms will be eating organic matter that is tens to thousands of years old. Since “we are what we eat,” this means that the tissues of those organisms, if dated using radiocarbon, should be thousands of years old—very strange.

So, as the rules continue to change in the Anthropocene, we can add yet another twist in this ever-changing era where a gastrotrich microbe that lives for three days can be thousands of years old when it dies.

In conjunction with colleagues from different institutions, I will continue to examine how permafrost organic matter changes with different seasonal thaw cycles and moves from soils through the watershed to the rivers. I am also collaborating with Drs. Robert Spencer and Francois Guillemette at Florida State University, where we are currently in the process of writing a comprehensive review on the ramifications of yedoma and how this will continue to change our view of the age of organisms in the Arctic.

Thomas S. Bianchi is professor of geology at the University of Florida. This article was previously published on TheConversation.com