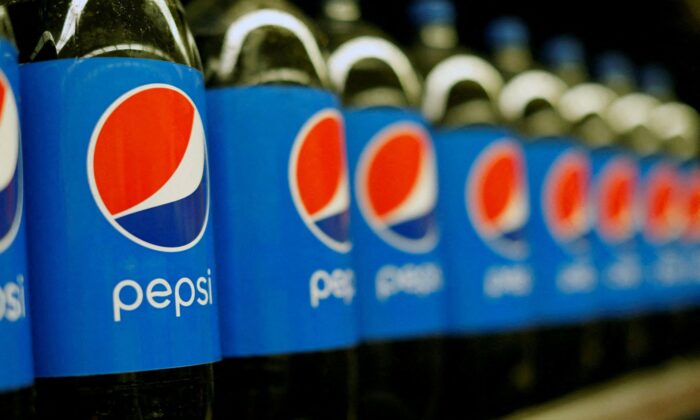 Bottles of Pepsi at a grocery store in Pasadena, Calif., on July 11, 2017. (Mario Anzuoni/Reuters)
Markets

PepsiCo Inc. beat estimates for quarterly revenue on Tuesday and raised its full-year forecast on steady demand for its sodas and snacks even in the face of several rounds of price increases.

Pandemic-induced disruptions to the global supply chain and runaway inflation have sent costs soaring on everything from aluminum cans to labor and shipping, forcing the packaged food industry to regularly raise product prices.

PepsiCo has said it could potentially raise prices later in the year if costs climb more than expected, but analysts and companies, including arch rival Coca-Cola Co., have warned that demand will likely slow as inflation shows no sign of cooling.

The Lays chips maker also said it took a $241 million charge in the first quarter related to property, plant and equipment impairment, as well as inventory write-downs due to the Russia–Ukraine crisis.

In March, PepsiCo and Coca-Cola said they were suspending soda sales in Russia, as a cascade of major American brands ceased some or all of their businesses in the country following Moscow’s invasion of Ukraine.

The company said it now expects fiscal 2022 organic revenue to rise 8 percent, compared with its forecast of a 6 percent increase.

Pepsico’s net revenue rose 9.3 percent to $16.20 billion in the first quarter ended March 19, also helped by the lifting of COVID-19 capacity restrictions in public places such as restaurants and theaters where Pepsi cola is sold.

That beat analysts’ revenue estimates of $15.54 billion, according to IBES data from Refinitiv.

However, the company trimmed its full-year core earnings per share forecast to $6.63 from $6.67 due to the impact of a stronger U.S. dollar.

The company’s shares rose marginally in premarket trading on Tuesday.