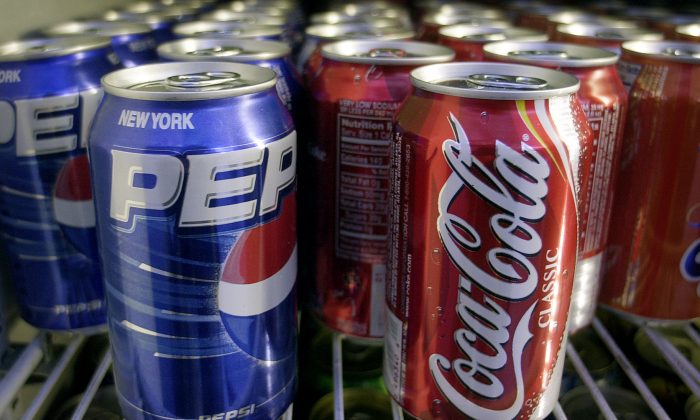 Cans of Pepsi and Coke are shown in a news stand refrigerator display rack in New York on April 22, 2005. (Mark Lennihan/AP Photo)
Inflation

PepsiCo, Coca-Cola Revenues Exceed Expectations, But Inflation Has Its Effects

Rival soft drink companies PepsiCo and Coca-Cola said on Feb. 10 that rising costs for packaging and transportation could put pressure on profits this year, despite the two having exceeded sales expectations due to robust demand from consumers.

The announcements were made as the Labor Department released its dismal report, showing U.S. inflation accelerating to a 7.5 percent annual rate in January at a four-decade high.

Coca-Cola’s earnings and revenue topped most analysts’ estimates, but the company’s 2022 forecast was weaker than expected.

Coca-Cola’s organic revenue climbed 9 percent in the fourth quarter, driven by a 10 percent increase in prices.

Analysts expect Coca-Cola’s full-year adjusted earnings per share to increase from 5 to 6 percent from the $2.32 posted in 2021.

As the price of aluminum cans and sugar have surged due to supply chain and workforce disruptions caused by the pandemic, food producers are pushing additional costs onto consumers to fully cushion their profit margins.

The rising cost of shipping and a lack of qualified truckers to import, export, and distribute products and supplies have added to the problem.

Coca-Cola’s adjusted operating margin fell to 22.1 percent in the fourth quarter, from 27.3 percent a year earlier.

The price hikes do not seem to be going away anytime soon, as the supply chain bottlenecks, trucker shortages, and the ensuing costs have seen little signs of easing.

“While we are seeing some impacts from the Omicron variant through the first few weeks of the year, we’re not seeing the same level of disruption as previous waves, and our system is better equipped,” said Coca-Cola CEO James Quincey on a conference call.

“Everyone, including ourselves, are very involved in fixing them,” said Quincey, who further added that “it’s not going to be back to 2019 fully in 2022,” predicting that higher inflation would continue to weigh on the company’s profit margins throughout the year.

However, Quincey does expect supply chain disruptions to improve in 2022, as the effects of the pandemic subside.

PepsiCo’s CFO Hugh Johnson, on the other hand, said the company is preparing for the possibility that the supply situation could continue into 2023.

Johnson said that PepsiCo may raise prices again later this year if costs and supply shortages are not kept under control.

“We control our supply chain basically all the way to the shelf. That puts us in a relatively better position, but I wouldn’t say we’re not going to have challenges. … We’re not immune to that,” said Johnston.

PepsiCo’s Chief Executive, Ramon Laguarta, made an optimistic note, saying “we have consumers following us in spite of higher prices,” and that recent price increases have not deterred its base.

Reuters, CNBC, and WSJ contributed to this report.