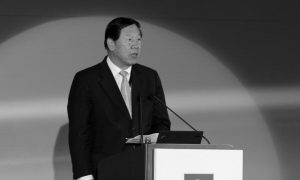 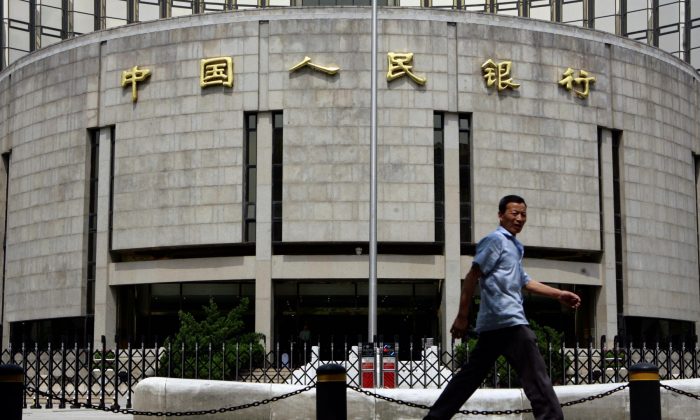 A pedestrian walks past the People's Bank of China, also known as China's Central Bank in Beijing on Aug. 22, 2007. (Teh Eng Koon/AFP/Getty Images)
China Business & Economy

The People’s Bank of China high-quality foreign exchange assets peaked in June 2014 and has fallen by a third as the bank sold high quality and bought lower quality assets.

People’s Bank of China (PBoC) balance sheet was tiny in 1980 with just $2.3 billion, or 40 percent of assets, in high-quality foreign exchange treasury debt. The other 60 percent was in low-quality “other assets,” typically non-performing domestic bank debt.

By June 2014, the PBOC had one of the best capitalized balance sheets on the planet with $3.993 trillion, or 84 percent of assets, in high quality foreign treasury debt.

But since mid-2014 the PBoC’s high quality foreign exchange holdings have plunged by almost $900 billion to $3.119 trillion, or 57 percentage assets. By June 2019, the low-quality “other assets” had increased by almost $250 billion, including $100 billion last month to nationalize the insolvent Baoshang Bank, the first state bailout since 1998.

PBoC assumed it would ease liquidity for the Interbank lending market by injecting $43.4 billion in direct credit guarantees to support small and rural Chinese banks on June 15.

Reuters reported that the PBoC tried to avoid being forced to flood even more liquidity into low-rated “other assets” when Li Chao, vice chairman of China Securities Regulatory Commission, met with seven of China’s top non-bank institutions on June 16 and directed them to continue making overnight Interbank loans to small rural banks.

But The Epoch Times reported that despite the efforts of the PBoC, Interbank borrowing overnight interest rate spiked from 1.84 percent to 13.44 percent on June 20, higher than the 8.22 percent in 2011 at the height of the Global Financial Crisis.

Meng Wei, a spokeswoman for the National Development and Reform Commission, stated that even though China was “facing a complex environment both at home and abroad, the country will stick to high-quality development and boost market vitality,” rather than resort to “flood-like” stimulus policies. Mei added that the state-directed economic model means that China has “many economic levers” to combat challenges.

But Enodo Economics suggests China has reached the end of its investment-led boom and faces serious headwinds from the Sino-U.S. trade confrontation that it seems destined to a “decoupling” of the two nations’ $840 billion trade relationship.

But Xuetong Yan wrote in The Chinese Journal of International Politics that after three decades of trade: “The liberal hegemony of the United States is fading and faces the growing challenges from other ideologies including those from China.”

Mao Zedong understood that the greatest danger to communism was memory. To destroy it, he had to destroy the past, and to do this, he launched the Cultural Revolution as a youth movement. At the heart of the revolution was the war against the Four Olds: old customs, old culture, old habits and old ideas.

Chinese leader Xi Jinping at this year’s May Fourth Movement celebration called for a youth movement of all Chinese writers and artists to create excellent works, make more contributions to national rejuvenation, and develop a great socialist culture in China. But he reaffirmed, “Chinese youth in the new era must obey the party and follow the party.”