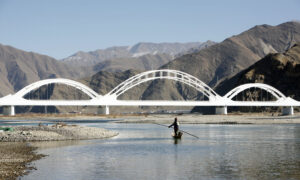 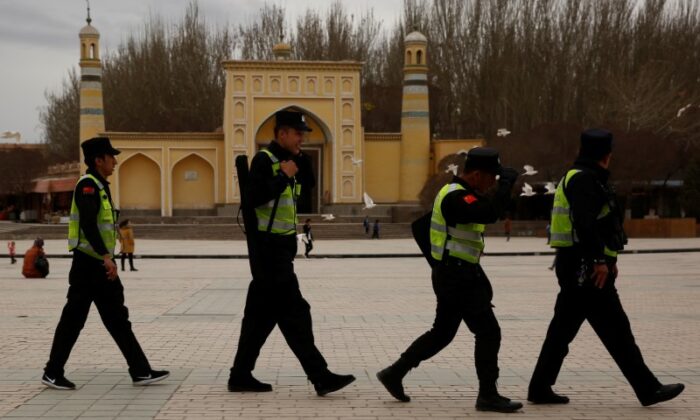 Police patrol walk in front of the Id Kah Mosque in the old city of Kashgar, in Xinjiang, China on March 22, 2017. (Reuters/Thomas Peter)
China Society

The outbreak of COVID-19 in Xinjiang’s Kashgar has worsened. Official data from the Chinese communist government has seen an increase of nearly 200 Chinese Communist Party (CCP) virus cases in the past few days.

The local area has activated a first-level emergency response. People from other areas who have traveled to Kashgar recently have been traced by the authorities and put into quarantine, even having the doors of their hotel rooms sealed by authorities and fed unknown drugs.

Mr. Li, an Ürümqi resident who was on a business trip to Kashgar recently, told The Epoch Times that he arrived in Kashgar on Oct. 22 and left on Oct. 25. After arriving at Ürümqi airport at 6 p.m. on Oct. 25, he and more than 40 people on the same plane were immediately taken to a quarantine site. Ürümqi, Xinjiang’s capital city, is 900 miles northeast of Kashgar.

“I was taken directly to the quarantine site, a hotel in Tianshan District. The staff didn’t speak much and didn’t tell us anything,” Li said.

Although he was tested for the CCP virus, commonly known as coronavirus, upon arrival, the authorities have not given him the result. “We asked how long the quarantine is and when we will be told the nucleic acid test results, but nobody replied,” he said.

Li added that when the quarantine first started, unknown drugs was delivered to them twice a day—in the morning and evening.

Li expressed his primary concern now is losing his job and being unable to make a living because of the government’s forced quarantine. He said that before returning from Kashgar, he had already planned to self-quarantine at a hotel.

“If they didn’t put us in a quarantine site, I would go to a hotel to quarantine myself,” he said. “Because if I go home and am found by the community office, then my whole family will be taken away to be put in centralized isolation.” The CCP has so-called “community offices” in each neighbourhood across China that allow it to oversee local affairs.

Another Ürümqi resident, Zhang Lu (alias), has also been in forced quarantine since returning from a business trip in Kashgar.

Zhang told The Epoch Times that he and his colleagues drove to Bachu County in Kashgar for business on Oct. 20 and returned to Ürümqi the next day. Then on Oct. 24, he went to another city Changji, 25 miles west of Ürümqi. On his return trip to Ürümqi that night, he was intercepted at the Toutun River checkpoint and transferred to a quarantine facility.

According to Zhang, there were about 100 vehicles sent to the quarantine area that night, meaning at least 100 people were quarantined along with him. They were from all over the country, including Sichuan, Henan, Guangdong, and people on road trips, Zhang said.

Zhang said that he would support government-enforced quarantines for the purpose of epidemic prevention as long as they prove effective in avoiding future lockdowns of the city.

A tourist visiting Xinjiang, who had already received a negative test result for the CCP virus, said she was tricked by the local authorities into traveling to a quarantine center where she was forced into quarantine and not allowed to leave, while having her identity card seized. The authorities had originally told her they were directing her to the local community office from where she could leave after registering.

The woman posted a long message on Chinese social media Weibo on Oct. 26 describing her situation: “They tricked the tourists, step by step, saying that we could leave Xinjiang if we have a nucleic acid test report after registering with the community office in the city.

“It turned out that our identity cards were directly seized by them and we were pulled into the quarantine site. I don’t understand why they seized the identity cards of tourists,” she said.

She added that the Xinjiang Health Commission was “lying to all tourists” after they told her that tourists could leave Xinjiang within seven days of a negative nucleic acid test. Instead, when tourists arrived at the quarantine facility, they were told they would have to quarantine for at least 14 days.

“They also said, without shame, that all the tourists who entered the quarantine site with me today were tricked by the authorities to come here,” she added.

She complained in her message that her calls to the Ürümqi Epidemic Prevention Headquarters had gone unanswered, and that staff at the quarantine site were ignoring all questions and requests.

She pleaded to the local authorities in the message, “Many people have been unreasonably pulled into quarantine by Ürümqi’s absurd epidemic prevention policy. Please let them go home!”

She also posted a photo on Weibo showing the door of the quarantine facility sealed with plastic tape.

When The Epoch Times tried to interview the woman, she said that all she wanted to say was on her Weibo and that it was not convenient for her to accept an interview. The Epoch Times found early Oct. 29 that all of her content posted to Weibo about the quarantine had been deleted.

According to official data, as of Oct. 27, there have been 22 confirmed cases and 161 asymptomatic infections in Shufu County, Kashgar City.

Gu Xiaohua and Ling Yun contributed to the report.