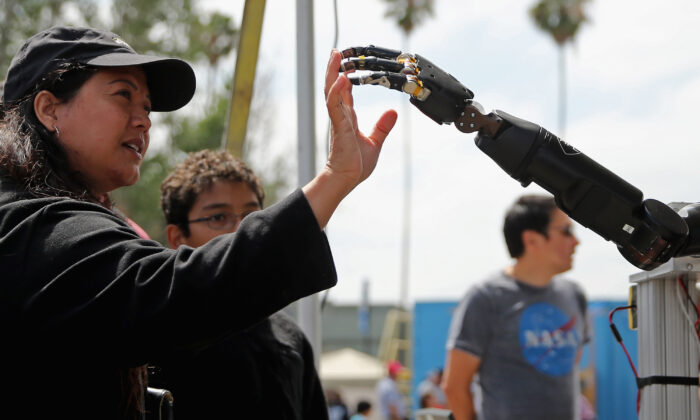 A former cybersecurity official at the Pentagon has clarified comments he made about China’s artificial intelligence during an interview with the Financial Times, denying that he told the publication the United States had “lost its AI fight to China.”

Nicolas Chaillan resigned from his role at the Department of Defense early in September, which he said was in protest over the slow pace of technological transformation in the United States’ military, and “because he could not stand to watch China overtake America,” the FT reported.

Chaillan allegedly told the FT that the United States had “already lost its AI fight to China” because of Beijing’s advances in artificial intelligence, machine learning, and cyber capabilities, which could prove detrimental to America’s future.

He also took a swipe at U.S. cyber defenses in some government departments, which he said were at “kindergarten level.”

“We have no competing fighting chance against China in 15 to 20 years. Right now, it’s already a done deal; it is already over in my opinion,” the FT cited him as saying.

However, Chaillan now claims that he didn’t specifically state that the United States had “lost” its AI fight to China, and took to LinkedIn on Oct. 10  to share a statement regarding his alleged comments.

“Friends, for those who saw this article, I want to clarify one thing. I never said we lost. I said as it stands and if we don’t wake up NOW we have no fighting chance to win against China in 15 years,” he wrote.

“I also said that they’re leading in AI and Cyber NOW. Not in 10 years as some BS reports mention. Of course, government-funded reports always tell us we have more time than we have so no one is held accountable for missing the already past due target. Those are just common sense facts. We are competing against 1.5B folks here. Either we are smarter and more agile or we lose. Period.”

Chaillan was hired in August 2018 by the Department of Defense as a highly qualified expert (HQE), according to his LinkedIn profile. He then was appointed to become chief software officer (CSO) at the Air Force under Dr. William Roper, the assistant secretary of the Air Force for acquisition, technology, and logistics.

Before the Air Force, Chaillan worked in the Office of the Secretary of Defense as a special adviser for cloud security and later DevSecOps lead at the DOD’s CIO office.

Chaillan announced his resignation as chief software officer—a position he has held since May 2019—at the start of September.

In a lengthy LinkedIn post, Chaillan said that military officials that lacked experience were regularly being placed in charge of cyber initiatives and that “with so much distraction just trying to push the laggards, I have stopped learning and engaging in innovations.”

“It seems clear to me that our leaders are not aligned with our vision in pursuing agility, the importance of DevSecOps, continuous delivery of capabilities, nor, most importantly, the need to fund teams, like Cloud One and Platform One, that are making things happen for the Department, and is a catalyst for change across the Government,” he wrote at the time.

He didn’t provide further information regarding what his next role might be.

Chaillan’s latest comments came shortly after the United Nations warned that artificial intelligence systems may pose a “negative, even catastrophic” threat to human rights and called for AI applications that aren’t used in compliance with human rights to be banned.

U.N. human rights chief Michelle Bachelet on Sept. 15 urged members states to put a temporary ban on the sale and use of AI until the potential risks it poses have been addressed and adequate safeguards put in place to ensure the technology won’t be abused.

Earlier this year, the U.S. National Security Commission on Artificial Intelligence warned that China could surpass the United States as the world’s AI superpower within the next decade.

“We must win the AI competition that is intensifying strategic competition with China,” the commission wrote in its report (pdf).

“China’s plans, resources, and progress should concern all Americans. It is an AI peer in many areas and an AI leader in some applications. We take seriously China’s ambition to surpass the United States as the world’s AI leader within a decade.”