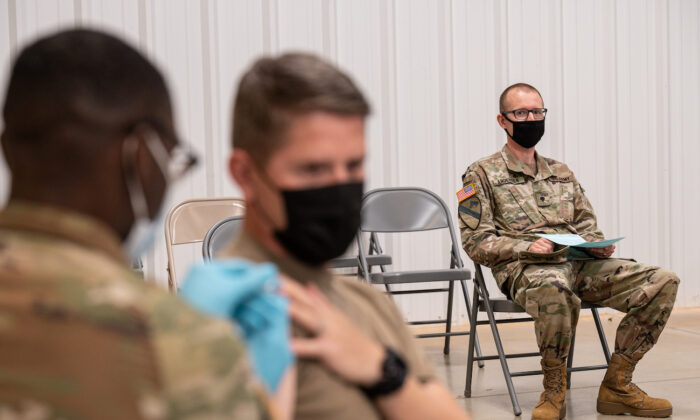 The Pentagon confirmed Tuesday it is sticking to its COVID-19 vaccine mandate days after President Joe Biden proclaimed the “pandemic is over.”

Since last year, the Department of Defense (DOD) has mandated that all armed service members get the vaccine. While there are medical and religious exemptions to the shot, they are rarely given out, triggering lawsuits and even a warning from the DOD inspector general.

“Certainly, from the Department of Defense standpoint, we still have a requirement to vaccinate when it comes to COVID. And so we’ll continue to implement our measures,” Pentagon press secretary Air Force Brig. Gen. Patrick Ryder said during a news conference Tuesday, according to a transcript of his remarks.

Echoing previous remarks from Defense Secretary Lloyd Austin, the vaccine mandate, Ryder asserted, is “about readiness” and “about war-fighting readiness.”

The Pentagon spokesman was responding to a question about whether the DOD will change its vaccine requirement in light of Biden’s interview over the past weekend in which the president declared the pandemic over.

Other officials in the federal government, including Surgeon General Vivek Murthy and White House adviser Anthony Fauci, have attempted to recast Biden’s comments to shape a narrative that COVID-19 isn’t finished.

“What [Biden] really meant is that the very severe stage of the pandemic of having … 3,000 deaths a day—that stage is no longer present,” Fauci told Politico on Tuesday before adding that “people should not be cavalier that we’re out of the woods.”

Republican lawmakers have warned that the COVID-19 vaccine may lead to the military losing thousands of troops who haven’t complied with the mandate. And it comes as current and former officials have said the military is facing a significant recruitment crisis as most branches have failed to meet recent thresholds.

“The Biden Administration’s military vaccine mandate is clearly harming military readiness by creating unnecessary recruiting and retention shortfalls,” Rep. Mike Johnson (R-La.) and other GOP lawmakers said in a recent statement. Johnson and dozens of other lawmakers last week called on the Pentagon to rescind the vaccine mandate.

“In the past, you have insisted the COVID-19 vaccine mandate is an imperative for readiness, but increasing amounts of data raise legitimate questions about your assertion,” the lawmakers wrote. “We also know that natural immunity provides better protection against infection and death than existing Covid vaccines, yet the Department still refuses to recognize it in lieu of vaccination.”

A directive issued by the Marine Corps last week rolled back its strict punishments for service members who are seeking COVID-19 vaccine exemptions, although it came following a recent court order that temporarily blocked the branch from taking action against service members.