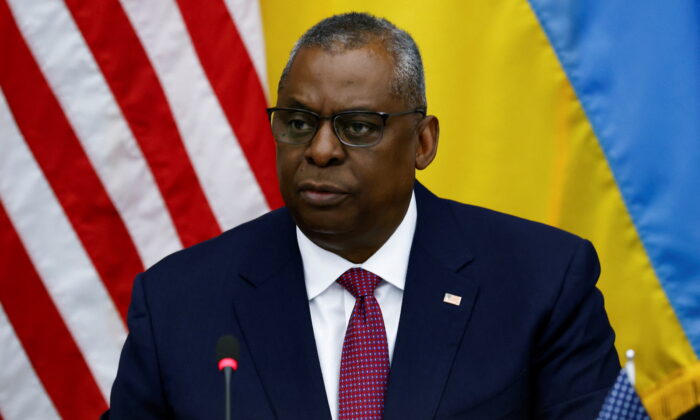 Defense Secretary Lloyd Austin attends the Ukraine Defense Contact group meeting ahead of a NATO defense ministers' meeting at the alliance's headquarters in Brussels, on June 15, 2022. (Yves Herman/Pool via Reuters)
US News

Three Guard personnel who are Christians are leading the class-action complaint against the force, Defense Secretary Lloyd Austin, and the Department of Homeland Security after their religious exemption requests were denied even though chaplains said each plaintiff held sincere religious objections to getting a COVID-19 vaccine.

The three do not want to get vaccinated because they oppose how aborted fetal cells were used in developing or testing the vaccines.

All three received final denial letters that were “virtually identical aside from name changes and dates,” according to the new lawsuit, filed in U.S. court in Fort Worth, Texas.

Natural immunity refers to the protection one enjoys after recovering from COVID-19, while mitigation protocols include masking and social distancing.

Testing confirmed that two of the plaintiffs recovered from COVID-19 while the third believes he did.

That treatment violates the Religious Freedom Restoration Act, plaintiffs assert. All are facing discharge for refusing to get a vaccine.

The suit notes that Sean O’Donnell, the acting Department of Defense inspector general, informed Austin that an investigation of adjudication of religious exemption requests found “a trend of generalized assessments rather than the individualized assessment that is required by Federal law and DoD and Military Service policies.”

The Coast Guard and the Pentagon declined to comment on the suit. The Department of Justice and the Department of Homeland Security (DHS) did not respond to requests for comment.

“Certainly, from the Department of Defense standpoint, we still have a requirement to vaccinate when it comes to COVID. And so we’ll continue to implement our measures,” Brig. Gen. Patrick Ryder, the Pentagon’s press secretary, told reporters in a briefing on Sept. 20.

The Coast Guard is part of the DHS in peacetime, but its COVID-19 vaccine mandate was imposed with references to Austin’s order for the military to get vaccinated.

The exact number of members of the proposed class is unclear; the Coast Guard has in the past refused to say how many personnel have been vaccinated and how many have asked for exemptions.

More than 1,200 Guardsmen have asked for religious accommodation from the mandate. At least 881 have been denied.

“My faith called me to serve my country in the Coast Guard. Now I find myself in a situation where I am being forced to choose between my faith and service to my country; it’s truly heartbreaking,” Lt. Junior Grade Alaric Stone, one of the plaintiffs, said in a statement.

“I took an oath to uphold and defend the Constitution, and religious freedom is a cornerstone of our Constitutional guarantees. There are more than a thousand other Coast Guard men and women who have religious objections to these vaccines and find themselves in a similar position. Our first President and Commander and Chief, George Washington, said it best when he wrote ‘When we assumed the Soldier, we did not lay aside the Citizen.’”

The suit is one of the first brought against the Coast Guard, but legal actions against military branches over how they’ve handled the mandate have largely been successful.

In one recent ruling, the Marine Corps was ordered not to discharge Marines who object to vaccination on religious grounds.

“Defendants fail to raise any persuasive arguments for why the Court should not extend the Preliminary Injunction issued on March 31, 2022 to cover the Class Members,” U.S. District Judge Matthew McFarland, a Trump appointee, said.

An appeals court later upheld the ruling and said there was “significant proof” that the Air Force discriminated against religious airmen.