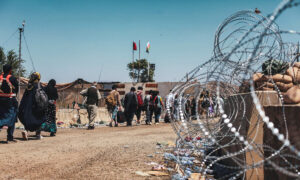 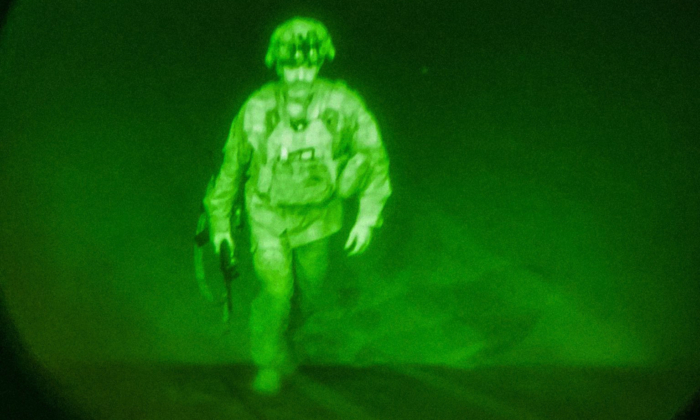 The Department of Defense on Aug. 30 released a photo of the last U.S. soldier to leave Afghanistan, capping off a frantic withdrawal and evacuation effort, and marking an end to America’s longest war.

The photograph, posted on Twitter by the official account of the Department of Defense, shows Maj. Gen. Chris Donahue, commanding general of the 82 Airborne Division, boarding a C-17 aircraft and “ending the U.S. mission in Kabul,” the Pentagon said.

“While the military evacuation is complete, the diplomatic mission to ensure additional U.S. citizens and eligible Afghans who want to leave, continues,” Marine Corps Gen. Kenneth McKenzie said at a Pentagon briefing announcing the completion of the U.S. withdrawal from Afghanistan.

The evacuation effort was disorganized and frantic, drawing criticism from many Americans as well as their Democrat and Republican representatives in Washington. An ISIS-claimed terrorist attack at the airport in Kabul, a central evacuation point, killed 13 American soldiers and dozens of Afghans.

McKenzie estimated the number of Americans still in Afghanistan is “in the low hundreds.” The State Department and the military are working to get out those left behind, he said. A Pentagon spokesman earlier on Aug. 30 said that around 600 Americans still remain in the country.

“We didn’t get out everyone that we wanted to get out,” the general said, adding that it is a “tough situation.”

Secretary of State Antony Blinken put the number of Americans left behind at under 200, “likely closer to 100,” and said the State Department would keep working to get them out.

President Joe Biden told ABC on Aug. 18, “If there are American citizens left [in Afghanistan], we’re going to stay to get them all out.”

Biden said military commanders unanimously favored ending the airlift, not extending it. He said he asked Blinken to coordinate with international partners in holding the Taliban to their promise of safe passage for Americans and others who want to leave in the days ahead.

The withdrawal and evacuation followed a blitz by the Taliban terrorist group, which recaptured most of Afghanistan in 11 days. The Biden administration has received blowback over the American weapons, vehicles, aircraft, and other equipment that were left to be seized by the Taliban.

The last planes took off from Kabul airport at 3:29 p.m. Washington time, or just before midnight in Kabul and one minute short of Biden’s goal for a full withdrawal.