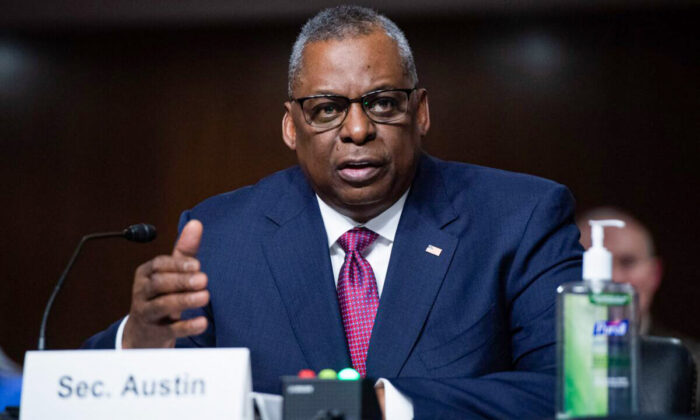 The Department of Defense (DOD) has been in “potential noncompliance” with standards for reviewing and communicating denials of religious accommodation requests to the vaccine mandate, the Pentagon’s watchdog wrote to the secretary of defense in a June memo obtained by The Epoch Times.

The June 2 memo by Acting Inspector General (IG) Sean W. O’Donnell states that after reviewing dozens of complaints from service members who were denied religious accommodation, the IG’s office “found a trend of generalized assessments rather than the individualized assessment that is required by Federal law and DoD and Military Service policies.”

The purpose of the memo was to inform the secretary of defense of “potential noncompliance with standards for reviewing and documenting the denial of religious accommodation requests of Service members identified through complaints submitted to the [IG’s] office.”

“The denial memorandums we reviewed generally did not reflect an individualized analysis, demonstrating that the Senior Military Official considered the full range of facts and circumstances relevant to the particular religious accommodation request,” the memo reads.

It provided an example of such cursory treatment. An Air Force general used a one-sentence statement to deny an airman’s request: “I disapprove your request for exemption from vaccinations under the provisions of AFI 48-110, paragraph 2-6.b.3.”

The acting IG also noted that the volume and rate of denial decisions were “concerning.”

An average of 50 denials per day were processed over a 90-day period, according to the memo.

“Assuming a 10-hour work day with no breaks or attention to other matters, the average review period was about 12 minutes for each package,” it reads. “Such a review period seems insufficient to process each request in an individualized manner and still perform the duties required for their position.”

The acting IG drew attention to DOD Instruction 1300.17, titled Religious Liberty in the Military Services. Paragraph 3.2.d, which was extracted in a footnote of the memo, states that “officials charged with making recommendations or taking final action on a Service member’s request for the accommodation of religious practices will review each request individually, considering the full range of facts and circumstances relevant to the specific request. … The means that is least restrictive to the requestor’s religious practice and that does not impede a compelling governmental interest will be determinative.”

The memo was received by Secretary of Defense Lloyd Austin who, in a Sept. 2 memo that was also obtained by The Epoch Times, referred the matter to the undersecretary of defense for personnel and readiness “for appropriate action, in coordination with the Secretaries of the Military Departments and the DoD Office of General Counsel, as necessary and appropriate.”

“Uniform standards must be applied to all requests for medical or administrative exemption in a manner consistent with law and DoD policy, including DoD Instruction 6205.02, ‘DoD Immunization Program,’ and DoD Instruction 1300.17, ‘Religious Liberty in the Military Services,’” reads the Sept. 2 memo signed by Austin, a Biden appointee.

When contacted by The Epoch Times about the June memo, a spokesperson for the IG’s Office said via email, “The memorandum in question is Controlled Unclassified Information and will not be released at this time.”

The spokesperson didn’t dispute the authenticity of the document.

To date, the combined services have separated at least 7,476 service members over the vaccine mandate, according to the most recent publicly released figures.

Army Chief Warrant Officer Danny Erickson (a pseudonym) discovered the IG memo through a fellow member of the military last week and posted extracts of the memo on his personal website that he created to be a voice for service members who continue to battle against the military’s vaccine mandate.

Erickson, an active-duty service member for more than 20 years and a whistleblower, spoke to The Epoch Times using a pseudonym because of a fear of reprisal.

“Air Force denials are almost identical, while Navy denials are an exact match,” he said. “For the last year, I’ve seen hundreds of other letters with striking similarities.

“These identical letters expose a level of corruption or unethical behavior within chains of command and leadership.

“The DOD has flat out, undeniably, broken the law concerning religious liberty, and the [secretary of defense] is fully aware of it, because of the memo dated June 2.”

What’s more, the secretary has done nothing to address the acting IG’s warning, Erickson alleged.

The Epoch Times also spoke to Navy Commander Robert A. Green Jr., who was relieved from his position as an executive officer of one of the seven Maritime Expeditionary Security Squadrons within Navy Expeditionary Combat Command on Jan. 7.

“I provided evidence that the Navy was violating federal law and military regulation in how they adjudicated the standardized pre-determined denials of religious accommodation requests,” Green said.

He was relieved of his duties as an executive officer only four days after this evidence was used as the basis for a preliminary injunction granted to Navy SEALs by a federal court.

“In December 2021, I filed an internal Navy complaint against Vice Admiral John Nowell who was the chief of naval personnel and the person designated by the Navy to adjudicate all religious accommodation requests for COVID-19 products,” Green said.

His complaint pointed to Nowell’s utilization of a standard operating procedure that “streamlined the process” that his staff would take to deny all religious accommodation requests. Green noted that “one of the very first steps in the process, once they received a request, was to paste the requestor’s name into the denial template and then route the denial for review.”

“It wasn’t until one of the last steps of the process, that a staffer was finally directed to actually open the request,” he said.

Green’s complaint was formally dismissed in August. A letter from the Office of the Naval Inspector General states that his complaint was “reviewed and evaluated” and determined to “not warrant an investigation” due to insufficient evidence.

“This is shocking because the Navy’s response came two months after the [IG’s] memo to the secretary of defense,” he said. “Claiming that they could find no evidence should have been impossible, considering a higher-level inspector general had already found that blanket denials of religious accommodations were being given to service members.

“Even Judge O’Connor from the Navy SEAL case in the [District Court for the] Northern District of Texas noted the evidence in his ruling granting a classwide injunction for the Navy.”

Both Erickson and Green allege that the DOD has violated federal regulations of the Religious Freedom Restoration Act of 1993 and DOD Instruction 1300.17 with the ongoing use of “blanket denials” of religious accommodations.

“Congress should be compelled to investigate these crimes immediately,” Erickson said. “The [IG’s] memo to the [secretary of defense] cannot be ignored.”

DOD officials and the Office of the Naval Inspector General didn’t respond to requests for comment.