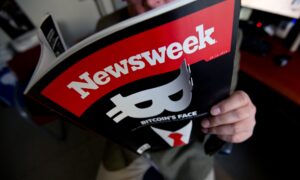 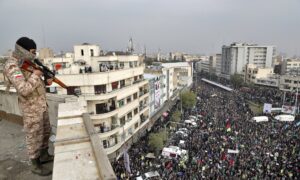 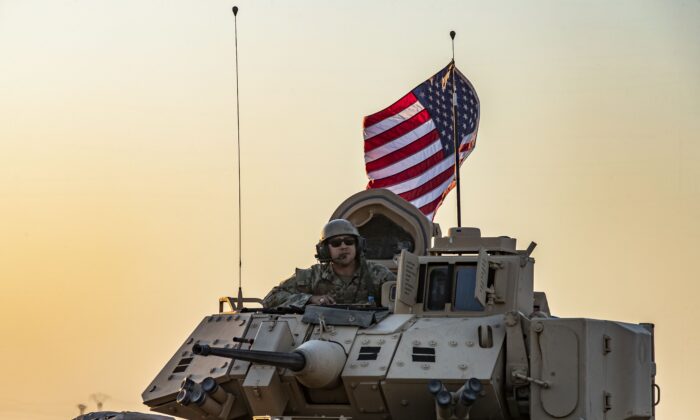 A U.S. soldier sits atop a Bradley armored personnel carrier as it drives near the town of Tal Tamr in the northeastern Syrian Hasakeh province on the border with Turkey, on Nov. 10, 2019. (Delil Souleiman/AFP via Getty Images)
US News

The Pentagon issued a statement denying a report claiming the United States is considering sending 14,000 more troops to the Middle East.

“This reporting by the @WSJ is wrong. The U.S. is not sending 14,000 troops to the Middle East to confront Iran,” Department of Defense spokeswoman Alyssa Farah said in a statement late Dec. 4.

After some people said the statement appeared to skirt the thrust of the report—that the U.S. was considering sending, not already sending—Farah issued an additional statement.

“To be clear, the reporting is wrong. The U.S. is not considering sending 14,000 additional troops to the Middle East,” she added.

To be clear, the reporting is wrong. The U.S. is not considering sending 14,000 additional troops to the Middle East.

Farah also directly responded to Sen. Josh Hawley (R-Mo.), who shared a link to the Wall Street Journal and said that he wanted to hear in the Senate Armed Services subcommittee hearing why the Pentagon wants 14,000 more troops.

“Is the Pentagon preparing for a land war?” Hawley wondered.

“Senator Hawley, this report is wrong,” Farah told him.

The Wall Street Journal cited unnamed “U.S. officials” in its report. No source was cited with any further identification. In addition to Farah, Pentagon spokeswoman Rebecca Rebarich went on the record appearing to rebut the report, telling the paper that Trump “has said for years that he doesn’t want to fight new wars in the Middle East.”

John Rood, the Pentagon’s No. 3 official, told reporters in Washington on Wednesday that there were “indications” of “potential Iranian aggression,” though he said he couldn’t disclose details.

“We’ve sent very clear and blunt signals to the Iranian government about the potential consequences of aggression,” Rood said.

Rood told lawmakers during the Senate Armed Services subcommittee hearing on Thursday that the article was “erroneous.”

“We are observing Iran’s behavior with concern. As you know, in recent months they have conducted some attacks … We continue to see threat reporting that concerns us as well.” Rood said the United States has deployed 14,000 troops in the last six months. “We haven’t made a decision to deploy an additional 14,000 troops,” he said.