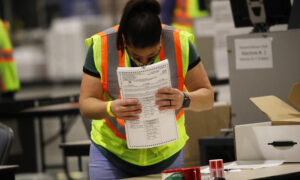 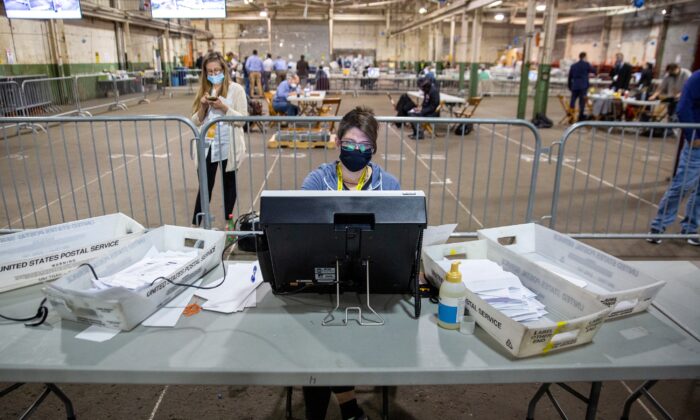 An observer watches a poll worker tabulate ballots at the Allegheny County Election Warehouse after the election in Pittsburgh, Pa., on Nov. 6, 2020. (John Altdorfer/Reuters)
Pennsylvania

Election officials in Pennsylvania’s Allegheny County voted on Nov. 10 to count more than 2,000 ballots with the date missing, while providing a two-day window for an appeal of the decision.

The Allegheny County Board of Elections said in a release that officials voted 2–1 to count 2,349 ballots that were returned with no date.

“There is a 48-hour period to appeal that vote and so those ballots will be put aside until that time period has expired with no appeal, or until appeals have been exhausted, whichever comes first,” the board said in the release.

The ballots were reportedly eligible aside from the missing date, according to a county solicitor cited by the Pittsburgh Tribune-Review.

“They applied on time, received their ballots, voted their ballots, returned them on time with their signature, their printed name, their address—the only thing they’re missing is their date,” said County Solicitor Andrew Szefi, according to the newspaper. “They were received timely, and our … ballot sorting machine imprints a date received on each envelope as they’re scanned.”

Board of Elections members Allegheny County Executive Rich Fitzgerald and Councilwoman Bethany Hallam opted to count the votes, with Councilman Sam DeMarco voting against. DeMarco explained his vote by saying that he would follow state law, which stipulates that the ballot mailing envelope must have a date, according to the newspaper.

Meanwhile, the board also said that another 2,000 or so ballots that were returned without a secrecy envelope won’t be counted. Also, another 947 ballots postmarked on or before Nov. 3 but received during the contested three-day grace period between when polls closed on Election Day and 5 p.m. the following Friday, have been sequestered and not counted.

Mail-in ballots arriving after Election Day in Pennsylvania are being contested in a Republican lawsuit, which challenges the validity of a deadline extension enacted by the administration of Democratic Gov. Tom Wolf. The state Supreme Court approved the extension over the objection of Republican lawmakers, prompting a petition to be filed with the U.S. Supreme Court, which was initially rejected.

Republicans filed an appeal and while the high court declined to consider it before the election, it left the door open to considering it at a later date.

The county’s Board of Elections also stated that the total estimated number of mail-in and absentee ballots that remain to be counted is just over 10,000.

The Trump campaign on Nov. 9 filed a lawsuit (pdf) against Pennsylvania Secretary of State Kathy Boockvar and seven county boards of election—Allegheny, Centre, Chester, Delaware, Philadelphia, Montgomery, and Northampton—claiming that “almost every critical aspect” of the state’s election was “effectively shrouded in secrecy.”

It alleges that the Pennsylvania election process violated the Constitution by creating different standards of verification and transparency for mail-in and in-person voters, as well as disparate treatment of Republican and Democratic voters and poll watchers.

The Pennsylvania lawsuits are among several legal challenges to the 2020 election mounted by Trump and his Republican allies, who have alleged voting irregularities.