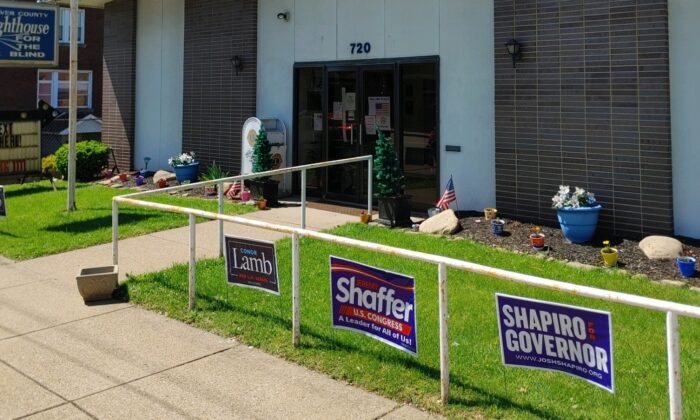 MT. LEBANON, Pennsylvania—Standing outside historic Julie Ward Howe Elementary School in Mt. Lebanon, Doug Mitchell laughed with a pair of rivals as residents streamed in and out of the local voting precinct casting their ballots for the contentious U.S. Senate and gubernatorial races on May 17

A retired banker, Mitchell has lived in this community seven miles southwest of Pittsburgh since 1972. He is a member of the Mt. Lebanon Republican Committee while the two gentlemen next to him are with the Mt. Lebanon Democratic Committee.

In Allegheny County, where Mt. Lebanon is located in the western Pennsylvania hills, 59.4 percent of the citizens voted Democrat in the last presidential election compared to the 39.0 percent who voted Republican.

“Most people we have talked to have said they have already made up their mind on who they are voting for,” said Steve, one of the Democratic Committee members outside of the precinct.

On the Republican side, the outcomes of the Senate and gubernatorial races are not clear.

On May 16, Susquehanna Polling & Research released a poll indicating that Donald Trump-endorsed Doug Mastriano owns a comfortable lead in the governor’s race with 29 percent followed by Bill McSwain (18 percent) and Lou Barletta (15 percent).

Trump remains influential in Pennsylvania, Mitchell added, and what happens in the primary and November’s general election will “lead the way to 2024.”

Unlike the Democrats, it is uncertain who will prevail in the GOP Senate primary, Mitchell said.

“The governor’s race isn’t as close, and Shapiro is already running ads against Mastriano, so it appears the Democrats think that Mastriano will win,” Mitchell said. “Who knows what will happen in the (GOP) Senate primary. Nobody will know until the results are announced.”

He will not appear at an election night party in Pittsburgh as originally planned, according to a campaign spokesperson, though he is expected to make a full recovery and continue campaigning in the near future.

On May 17, he cast an emergency absentee ballot.

Also on May 17, Fetterman underwent a procedure to implant a pacemaker with a defibrillator.

After the surgery, Fetterman tweeted “We got the all-clear that it was successful, and that I’m on track for a full recovery.”

“Of course, he wants to go home and be with the kids and be out back on the road,” Fetterman’s wife, Gisele Fetterman, said outside a Braddock polling place where she voted on May 17. “But, you know, doctor’s orders and my orders. I am not letting that happen.”

“We feel very good about today,” she added. “I think he will get to celebrate soon.”

Several strategists agree that Fetterman’s stroke should not impact the primary’s final results.

Fetterman will “be back on the trail soon” after recovering from the stroke, his wife said.

“This is the seat that could decide very much the future of our country and where we go on issues that he’s worked so hard on for the last two decades,” Gisele Fetterman said. “So it’s a very important seat. It’s very serious.”

Only about 5,000 mail-ballot requesters in Philadelphia are Republicans, compared with about 93,000 Democrats.

Multiple political pundits predicted that results would be known for most races by the evening of May 17, or the morning of May 18.