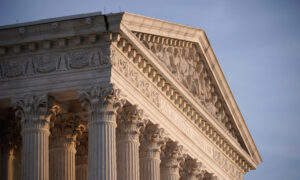 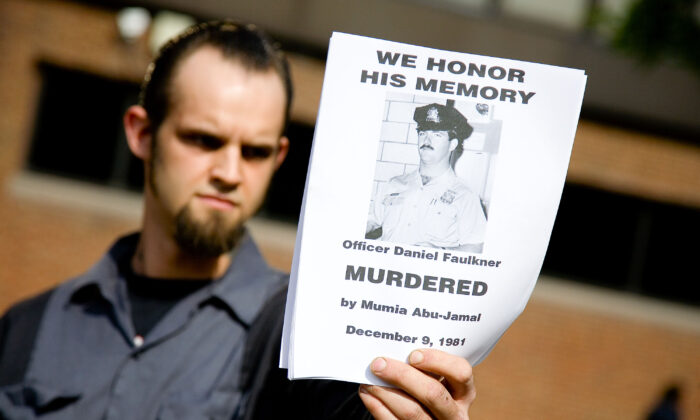 A counter-protester holds a handbill in remembrance of slain police officer Daniel Faulkner at a rally for Faulker's convicted murderer, death-row inmate Mumia Abu-Jamal outside the Federal Court building in Philadelphia, on May 17, 2007. (Jeff Fusco/Getty Images)
Judiciary

The Pennsylvania Supreme Court threw out a petition filed by the widow of a Philadelphia police officer who wanted anti-police Philadelphia District Attorney Larry Krasner barred from handling ongoing appeals in the case of convicted cop-killer Mumia Abu-Jamal.

Abu-Jamal, a former Black Panther militant born Wesley Cook, was convicted of the 1981 murder of Daniel Faulkner. During his trial, Abu-Jamal didn’t deny the killing. As Faulkner tried to arrest Abu-Jamal’s brother during a traffic stop, Abu-Jamal shot the white policeman once in the back and then standing over him, shot him four more times at close range, once directly in the face. Multiple eyewitnesses saw the killing.

The convicted murderer was originally sentenced to death, but the sentence was later reduced to life imprisonment in a plea deal. Abu-Jamal’s plight is a cause célèbre of the Black Lives Matter movement.

The widow, Maureen Faulkner, argued in a petition to the court that Krasner, whose online bio boasts of his “steadfast commitment to social justice,” should be excused from representing the prosecution side because of his hostility to police and various conflicts of interest.

Among other examples, she pointed out that Krasner was one of several “movement attorneys” who defended protesters charged with assaults on police and vandalism during the 2000 Republican National Convention in Philadelphia, noting that the protesters called for Abu-Jamal’s release from prison.

Faulkner had asked that all future appeals be dealt with by Pennsylvania Attorney General Josh Shapiro.

On Dec. 16, a divided Pennsylvania Supreme Court dismissed Faulkner’s petition in a one-page unsigned order based on the recommendation of Judge John M. Cleland, of McKean County, who was appointed to review the case, the Philadelphia Inquirer reported.

Faulkner “failed to establish the existence of a direct conflict of interest” or “an appearance of impropriety” that would compromise the ability of Krasner’s office to perform its duties, Cleland concluded.

Justice Kevin Dougherty, formerly a Philadelphia Common Pleas Court judge, concurred with the dismissal order, but wrote a 23-page statement in which he stated that Faulkner “exposed several grave and alarming allegations” about Krasner’s “ability to act impartially in this case.”

Krasner’s office was “rife with conflicts of interest that undermine the integrity of the adversarial system, and raise clear questions of appearances of impropriety that will vitiate the public’s faith in justice being done,” Dougherty wrote, quoting Faulkner.

For example, Krasner’s failure to oppose a remand petition filed by Abu-Jamal “was tantamount to refusing to carry out the District Attorney’s responsibility to enforce the law and defend the prosecution of a stone-cold murderer,” Faulkner argued.

After the decision, Faulkner told reporters she was “quite upset and distraught” by the order, according to the Inquirer.

John McNesby, who heads the Philadelphia Fraternal Order of Police Lodge 5, the police officers’ union, said: “We’ve suffered setbacks in this case in the past, and we’ll continue to fight for Maureen, the entire Faulkner family, and Philadelphia police officers. We are on the right side of justice in this case, and we believe convicted cop-killer Mumia Abu-Jamal should remain in prison for the rest of his life.”

Krasner once quipped that his track record as a civil rights lawyer made him “completely unelectable.” However, he bested seven other candidates in the Democratic primary election and went on to win the general election in November 2017.

“Krasner, who has represented Occupy Philadelphia and Black Lives Matter, and has sued the police department more than 75 times, had a major fundraising advantage that was provided almost exclusively by [radical billionaire George] Soros,” the Washington Free Beacon reported at the time.

Soros gave at least $1.7 million in campaign donations to Krasner as part of a nationwide giving effort to elect soft-on-crime district attorneys.

On the campaign trail, Krasner vowed never to seek the death penalty in any criminal case and to keep Philadelphia a so-called sanctuary city that refuses to cooperate with federal immigration enforcement. A segment of his platform, titled “Resist the Trump Administration,” spelled out his plan to “protect immigrants,” “reject the drug war,” and “stand up to police misconduct.”

On a candidate questionnaire during the campaign, Krasner wrote, “The biggest challenge for the next DA and any progressive elected to office will be standing up to [President Donald] Trump and [then-Attorney General Jeff] Sessions and their corrupt and repressive regime,” according to Ballotpedia.

Krasner’s office didn’t immediately respond to requests by The Epoch Times for comment.