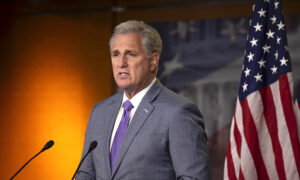 Lawmakers in Pennsylvania are moving closer to potentially voting to authorize an audit of the commonwealth’s 2020 elections following recent remarks made by Pennsylvania state Sen. David Argall, a top Republican in the upper chamber.

Without ruling out an Arizona-style audit occurring in the state, Argall, who chairs the Senate State Government Committee, told reporters that he wants to see another review of Pennsylvania’s election results.

“It’s a very careful recount, forensic audit, so yeah, I don’t see the danger in it,” Argall told reporters over the weekend. “I just think that it would not be a bad idea at all to proceed with an audit similar to what they’re doing in Arizona.”

The state senator noted that while there have been other audits of the Nov. 3 election that confirmed President Joe Biden’s victory, an independent audit may be needed. Argall said that a number of his constituents have requested one.

“I am not hung up on how exactly the audit is completed. I just think that we should complete one,” he said. “I think it needs to be independent. I think there is going to be mistrust if the same people who conducted the election conduct the audit.”

“Why is State Senator Jake Corman of Pennsylvania fighting so hard that there not be a forensic audit of the 2020 Presidential Election scam? Corman is fighting as though he were a radical left Democrat, saying that a forensic audit of Pennsylvania not take place,” Trump said in a statement. “Why is Senator David Argall playing the same game? Are they stupid, corrupt, or naive?”

As for Corman, Trump suggested that he would work to support Republican candidates to primary him during the upcoming election.

Argall’s office disputed Trump’s statement in comments to The Epoch Times last week and said the senator “support[s] a forensic audit” and is “investigating details on how to do that.” Corman’s office, in response to an inquiry, had no comment on Trump’s statement.

Starting in April, auditors, led by Florida-based technology firm Cyber Ninjas, have carried out a review of 2.1 million ballots cast in Maricopa County, Arizona, after the state Senate approved the audit. A final report is expected to be released in August, officials said last week.

Some Republicans in the Pennsylvania state legislature have expressed opposition to a possible audit of the election. Among them is Rep. Seth Grove, a Republican who chairs the House State Government Committee, who wrote on Twitter earlier this month that the state House won’t be authorizing any more audits.

Instead, Grove said that the legislature is focused on passing laws designed to safeguard future elections.

Argall’s office didn’t immediately respond to a request by The Epoch Times for additional comment.