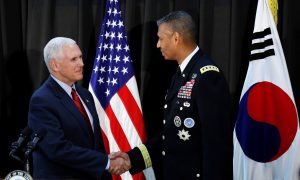 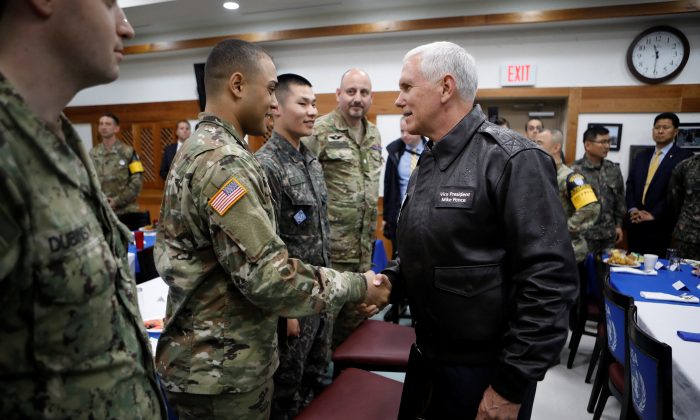 U.S. Vice President Mike Pence during a meeting with U.S. and South Korean soldiers at Camp Bonifas near the truce village of Panmunjom, in Paju, South Korea on April 17, 2017. (REUTERS/Kim Hong-Ji)
International

SEOUL—U.S. Vice President Mike Pence put North Korea on notice on Monday, warning that recent U.S. strikes in Syria and Afghanistan showed that the resolve of President Donald Trump should not be tested.

Pence and South Korean acting president Hwang Kyo-ahn, speaking a day after a failed missile test by the North and two days after a huge display of missiles in Pyongyang, also said they would strengthen anti-North Korea defenses by moving ahead with the early deployment of the THAAD missile-defense system.

Pence is on the first stop of a four-nation Asia tour intended to show America’s allies, and remind its adversaries, that the Trump administration was not turning its back on the increasingly volatile region.

“Just in the past two weeks, the world witnessed the strength and resolve of our new president in actions taken in Syria and Afghanistan,” Pence said in a joint appearance with Hwang.

“North Korea would do well not to test his resolve or the strength of the armed forces of the United States in this region,” Pence said.

The U.S. Navy this month struck a Syrian airfield with 59 Tomahawk missiles after a chemical weapons attack. On Thursday, the U.S. military said it had dropped “the mother of all bombs”, the largest non-nuclear device it has ever unleashed in combat, on a network of caves and tunnels used by the ISIS terrorist group in Afghanistan.

“I express again a strong support and alliance to the Syrian government and its people for its work of justice, condemning the United States’ recent violent invasive act against your country,” Kim said.

On a visit to the border between North and South Korea earlier in the day, Pence, whose father served in the 1950-53 Korean War, said the United States would stand by its “iron-clad alliance” with South Korea.

“All options are on the table to achieve the objectives and ensure the stability of the people of this country,” he told reporters as tinny propaganda music floated across from the North Korean side of the so-called demilitarized zone (DMZ).

Pence is expected to discuss rising tension on the Korean peninsula with Japanese Prime Minister Shinzo Abe on Tuesday when he travels to Tokyo to kick off economic talks with Finance Minister Taro Aso.

Pence will meet business leaders in Seoul before departing – a “listening session” he will reprise at other stops on his tour in Tokyo, Jakarta and Sydney.

His economic discussions will be closely watched to see how hard a line Washington is prepared to take on trade. Trump campaigned for office on an “America First” platform, and has vowed to narrow big trade deficits with nations like China, Germany and Japan.

But Trump has also shown he is willing to link trade to other issues, saying he would cut a better trade deal with the Chinese regimes if it exerts influence on North Korea to curb its nuclear ambitions.

Trump acknowledged on Sunday that the softer line he had taken on China’s management of its currency was linked to its help on North Korea.

The United States, its allies and the Chinese regime are working on a range of responses to North Korea’s latest failed ballistic missile test, Trump’s national security adviser said on Sunday, citing what he called an international consensus to act.

The Chinese regime has spoken out against the North’s weapons tests and has supported U.N. sanctions. It has repeatedly called for talks while appearing increasingly frustrated with the North.

But Pence and Hwang said they were troubled by retaliatory economic moves by China against the deployment in South Korea of a U.S. anti-missile system known as the Terminal High Altitude Area Defense (THAAD).

South Korea, which accuses the Chinese regime of discriminating against some South Korean companies working in China, and the United States say the sole purpose of THAAD is to guard against North Korean missiles.

The Chinese regime says its powerful radar can penetrate its territory and undermine its security and spoke out against it again on Monday.

Russian Foreign Minister Sergei Lavrov said Moscow could not accept North Korea’s “reckless nuclear actions” but the United States should not take unilateral action against it.

Trump’s national security adviser, H.R. McMaster, indicated on Sunday that Trump was not considering military action against North Korea for now, even as a nuclear-powered aircraft carrier strike group was heading for the region.

“It’s time for us to undertake all actions we can, short of a military option, to try to resolve this peacefully,” he said on ABC’s “This Week” programme.

The Trump administration is focusing its strategy on tougher economic sanctions, possibly including an oil embargo, a global ban on its airline, intercepting cargo ships and punishing Chinese banks doing business with Pyongyang.

Tensions have risen as Trump takes a hard rhetorical line with Kim Jong Un, who has rebuffed admonitions from China and proceeded with nuclear and missile programs seen by Washington as a direct threat.

China says the crisis is between the United States and North Korea. Lu said China efforts to help achieve denuclearization were clear, adding: “China is not the initiator of the Korean peninsula nuclear issue.”

The Chinese regime banned imports of North Korean coal on Feb. 26, cutting off its most important export and Chinese media has raised the possibility of restricting oil shipments to the North if it unleashed more provocations.

Pyongyang has conducted several missile and nuclear tests in defiance of U.N. sanctions, and has said it has developed and would launch a missile that can strike the U.S. mainland.

U.S. officials and experts believe it is some time away from mastering the necessary technology, including miniaturizing a nuclear warhead.