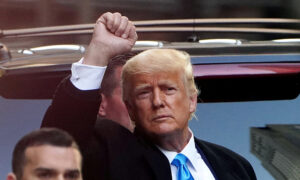 Vice President Mike Pence said that intelligence indicates that the migrant caravan, currently in Mexico and headed toward the United States after rejecting a new offer by Mexico, was organized by leftist political organizations and activists.

Pence said foreign partners provided the intelligence and he also learned of some during a phone call with Juan Orlando Hernández, the president of Honduras.

“What the president of Honduras told me is that the caravan was organized by leftist organizations, political activists within Honduras, and he said it was being funded by outside groups, and even from Venezuela,” Pence told Fox News late Friday, Oct. 26, while campaigning in the southwest United States.

“So the American people, I think, see through this—they understand this is not a spontaneous caravan of vulnerable people.”

The comments came after Pence told reporters in the White House on Oct. 23, about intel conveyed by Hernández that indicated the caravan “was organized by leftist groups in Honduras, financed by Venezuela, and sent north to challenge our sovereignty and challenge our border.”

The caravan, which has been estimated at as many as 14,000 people, includes criminals and gang members, American officials previously confirmed.

Charles Faddis, a former CIA operations officer, said that the caravan appeared to be organized in part by the opposition groups within Honduras, including the leftist Libre Party, which is closely allied with the socialist governments in the region such as Cuba and Venezuela.

“The full scope of the conspiracy behind this ‘migrant caravan’ remains as yet unclear. Yet, already what has emerged shows that far from being a campaign for the rights of oppressed peoples it is a deliberate, pre-planned effort on the part of socialist enemies of the United States to damage American prestige and to embarrass American allies,” Faddis wrote in And Magazine.

“The men and women moving their way north and subjecting themselves to significant hardship and risk are likely for the most part pawns in this game. They know only that someone has fed them the lie that they will emerge from this better off.”

“Behind the march, however, are emerging the shadowy outlines of old enemies—socialists, communist dictators and parties whose real agenda does not include democratic government or individual liberty. It is the installation of oppressive, totalitarian regimes in this Hemisphere,” he added.

One pro-illegal immigration group, Pueblo Sin Fronteras, has admitted to organizing caravans in the past but claimed not to be involved in organizing the current one. However, a number of its organizers have been traveling with the caravan, and one was arrested in Mexico on charges of resisting arrest.

Pence told crowds in Arizona that the migrant caravan will not enter the United States, echoing President Donald Trump’s declaration that the border is closed.

“Anyone coming up in this caravan should just turn around,” Pence told Fox News. “They should go home, or they should apply for asylum in Mexico.”

Mexico made a fresh offer to migrants on Friday, telling them they could remain in the country to work. Mexican President Enrique Pena Nieto said in a pre-recorded address that migrants could register for asylum in southern Mexico and obtain temporary identification that would enable them to work and those with children to send the kids to school.

“This plan is only for those who comply with Mexican laws, and it’s a first step towards a permanent solution for those who are granted refugee status in Mexico,” Pena Nieto said.

But most migrants rejected the plan and the caravan kept moving forward. Also on Friday, top U.S. official Jim Mattis reportedly authorized sending troops to the border to help prevent the migrants from entering.