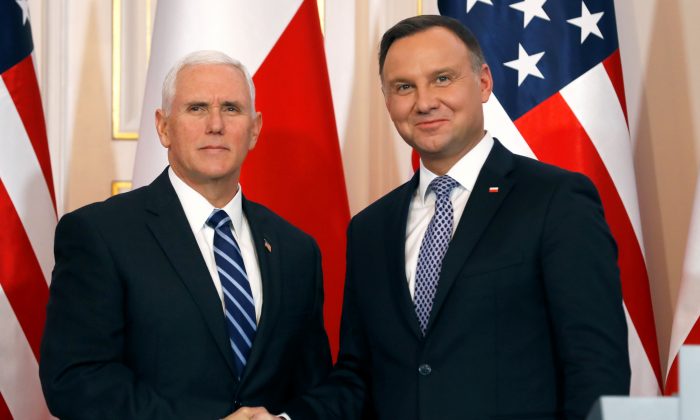 WARSAW—U.S. Vice President Mike Pence praised Poland on Feb. 13 for its commitment to “protecting the telecoms sector from China,” as part of a concerted push by the United States to convince its allies to exclude tech giant Huawei from telecoms projects.

Fueled by concerns that Huawei products could be used by China for espionage, Pence and U.S. Secretary of State Mike Pompeo have stressed the dangers of collaborating with the Chinese firm during appearances in Poland and central European neighbors this week.

“We must continue to work so that all investment review mechanisms protect critical security and economic infrastructure going forward,” Pence said during a joint press conference in Warsaw with Polish President Andrzej Duda.

In January, Poland arrested a Chinese employee of Huawei and a former Polish security official on spying allegations.

“The recent action your government has taken against a Huawei executive and a Polish national accused of cooperating with him demonstrate your government’s commitment to ensure our telecommunications sector is not compromised in a way that threatens our national security,” Pence said.

The comments came as Poland seeks to convince the United States to increase its military presence in the country.

The number of U.S. troops in Poland is capped at 4,500 but it fluctuates as formations rotate.

Poland, alarmed by Russia’s assertiveness on NATO’s eastern flank, has lobbied hard for the stationing of NATO troops on its soil, especially since Moscow’s annexation of Crimea in 2014.

Duda told U.S. President Donald Trump in September on a trip to Washington that he would be willing to commit more than $2 billion to help facilitate the building of a permanent U.S. base on Polish soil.