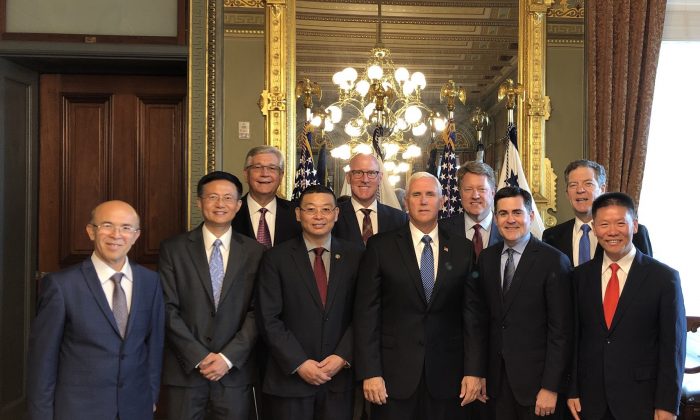 Pence Meets With Representatives of Religious Groups Persecuted in China

WASHINGTON—Representatives of three persecuted religious groups in China, along with other advocates for religious freedom, met with Vice President Mike Pence and representatives of the National Security Council inside the vice president’s ceremonial office in the Executive Office Building on Aug. 5. They discussed how the Chinese regime is suppressing religion in China and ways to respond to China’s persecution.

Bob Fu, founder and president of the Christian human rights organization ChinaAid, spoke about the monitoring of Christian churches in China.

Omer Kanat, director of the Uyghur Human Rights Project, recounted the situation in Xinjiang, where the U.S. State Department estimates that roughly 1 million Uyghur Muslims have been detained inside concentration camps for political indoctrination.

According to an account of the meeting published on the ChinaAid website, Fu asked the Trump administration to make use of the “Global Magnitsky Human Rights Accountability Act” to sanction key Chinese officials involved in religious persecution, including the Chinese Communist Party boss of Xinjiang, Chen Quanguo, for their treatment of Uyghurs. The act allows the United States to withdraw the visa of any person or entity involved in deep corruption or, according to Sec. 3, Clause (1) of the act, “is responsible for extrajudicial killings, torture, or other gross violations of human rights.”

Jeff Chen, vice president for advocacy at the Washington Falun Dafa Association, spoke about the persecution of Falun Gong, also known as Falun Dafa, a meditation practice with spiritual teachings that has been persecuted by the Chinese regime since July 1999.

Chen said he told the vice president: “The persecution is still severe. In the last 20 years, we have identified over 4,000 people who died of torture or other physical abuses. Due to the information blockade, the actual number would be many times higher. Organ harvesting has been going on for nearly 20 years also. The number of the victims is really high.”

According to the ChinaAid account, Russell Moore, president of the Ethics and Religious Liberty Commission of the Southern Baptist Convention, proposed that the U.S. government press China to extend an invitation to the U.S. Commission on International Religious Freedom and the U.S. Ambassador-at-Large for International Religious Freedom Sam Brownback. Moore said U.S. authorities should be granted unrestricted access to Tibet and Xinjiang during the trip, according to the account.

Meanwhile, Greg Mitchell, co-president of the International Religious Freedom Roundtable, suggested that the U.S. government openly request that specific prisoners of conscience in China be released. The roundtable was convened during the 2018 Ministerial to Advance Religious Freedom, the world’s largest conference for religious freedom, hosted by the U.S. Department of State.

David Curry, CEO of Open Doors USA, an advocacy group for persecuted Christians, asked that the State Department once again designate China as a Country of Particular Concern in its annual report on religious freedom. Such a status would highlight China’s abuse of human rights and permit the president to impose a wider range of sanctions against the Chinese regime, he said, according to ChinaAid.

Randel Everett, president of the Christian human rights organization 21Wilberforce, stressed the importance of supporting internet freedom and technologies that allow Chinese citizens to circumvent the Chinese regime’s great firewall, according to Chen’s recounting of events.

Meanwhile, Yang Jianli, founder of Citizen Power Initiatives for China, a group that advocates for democracy in China, reported that many China-related human rights organizations have recently pushed the U.S. Congress to enact laws to sanction companies, American and Chinese, that have helped the Chinese Communist Party build surveillance systems.

After the vice president left the meeting, the group continued discussing the significance of ending religious persecution in China.

Chen said that not just the persecuted are victims, but all Chinese people.

In order to persecute Falun Gong, the legal system has been distorted to sentence Falun Gong practitioners, Chen said. Religious freedom is guaranteed under the Chinese constitution.

Meanwhile, Chinese officials willing to carry out persecution have been promoted, fueling corruption. The result has been a deep decline in the level of morality in China, Chen said.

The meeting in Pence’s office was the latest initiative by the Trump administration to champion religious freedom. At the Second Ministerial to Advance Religious Freedom, held July 16 to 18, Brownback described the suppression of people of faith as a global crisis. One particular panel highlighted religious persecution in China.

On July 17 in the Oval Office, President Donald Trump met with a group of survivors of religious persecution, including four from China: Jewher Ilham, a Uyghur Muslim; Yuhua Zhang, a Falun Gong practitioner; Nyima Lhamo, a Tibetan Buddhist; and Manping Ouyang, a Christian.