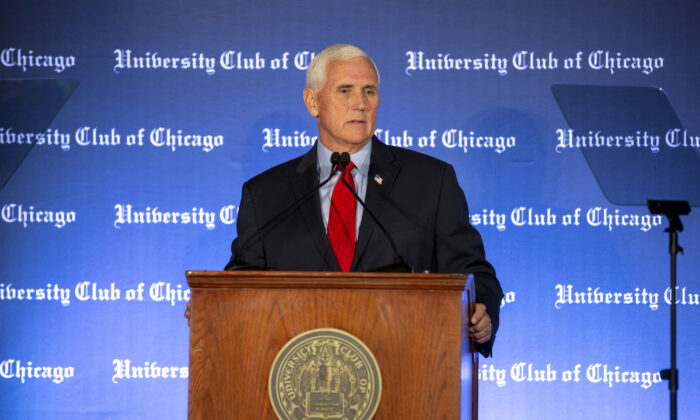 Former Vice President Mike Pence speaks to a crowd of supporters at the University Club of Chicago in Chicago on June 20, 2022. (Jim Vondruska/Getty Images)
Republicans

Pence Dials Back Willingness to Testify to Jan. 6 House Committee

Former Vice President Mike Pence has reneged on his previous statement that he would consider testifying before the House Jan. 6 committee.

Pence recently said he would consider appearing before the Democrat-led committee investigating the Jan. 6, 2021, Capitol breach. Meanwhile, Rep. Liz Cheney (R-Wyo.), who is considered the face of the panel, recently said that Pence was in talks with the committee to testify.

But during an interview with The Washington Times over the weekend, Pence spoke with a more cautious tone and described the committee as “very partisan.”

“If the committee wanted to extend a formal invitation I would consider it, but we would reflect very carefully on my obligations to preserve the separation of powers and the constitutional framework that I served in,” he said.

Pence, who was a Republican governor of Indiana before becoming vice president, told the newspaper that he has “real concerns about the partisan nature of the Jan. 6 committee.”

“By essentially rendering this as a partisan committee that’s operating on a very partisan basis—and at times leaking information and leaking testimony—I think in many respects it has squandered an opportunity to really thoughtfully examine what took place that day and where the failings were,” he said.

After leaving the White House, the paths of Pence and his former boss, former President Donald Trump, have diverged. Trump criticized Pence for not objecting to or attempting to delay the certification of the 2020 presidential election on Jan. 6, 2021, while Pence has claimed he didn’t have the power to do so.

“If the Vice President [Mike Pence] had ‘absolutely no right’ to change the Presidential Election results in the Senate, despite fraud and many other irregularities, how come the Democrats and RINO Republicans … are desperately trying to pass legislation that will not allow the Vice President to change the results of the election?” Trump said in a statement on Jan. 30 this year.

Pence’s comments about the panel come as analysts speculate he’s attempting to mount a run for president in 2024, potentially putting him further at odds with Trump. Last month, Pence and Trump held separate rallies in Arizona, with Pence endorsing GOP gubernatorial candidate Karrin Taylor Robson, who was defeated by the Trump-backed Kari Lake during the primary.

The former vice president also drew criticism on social media for saying Republicans shouldn’t be so critical of the FBI for its unprecedented raid of Trump’s home about two weeks ago.

“The Republican Party is the party of law and order,” Pence stated, according to The Associated Press. “Our party stands with the men and women who stand on the thin blue line at the federal and state and local level.”