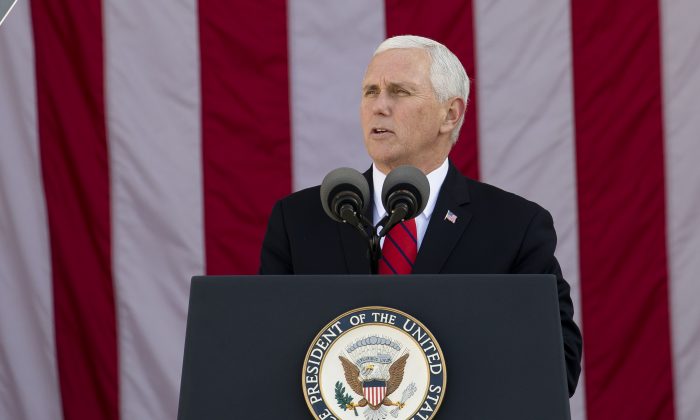 U.S. Vice President Mike Pence warned Beijing that any violent crackdown in Hong Kong on protesters would harm the Sino-U.S. trade talks, reiterating a remark made by the U.S. President Donald Trump a day earlier.

“For the United States to make a deal with China, Beijing needs to honor its commitments—beginning with the commitment China made in 1984 to respect the integrity of Hong Kong’s laws through the Sino-British joint declaration,” Pence stated in a speech given at the Detroit Economic Club on Aug. 19.

The 1984 bilateral treaty was drafted to stipulate how Hong Kong’s sovereignty would be transferred from Britain to China in 1997, whereby both sides agreed to retain the territory’s autonomy and freedoms not afforded in the mainland, under the “one country, two systems” model for 50 years.

“As the president said yesterday, it will be much harder for us to make a deal if something violent happens in Hong Kong. And I want to assure you, our administration will continue to urge Beijing to act in a humanitarian manner and urge China and the demonstrators in Hong Kong to resolve their differences peacefully,” Pence added.

Trump made the warning to Beijing on Aug. 19, when he said that any violence similar to Tiananmen Square would make it hard for the United States to agree to any trade deal.

..deferral to December. It actually helps China more than us, but will be reciprocated. Millions of jobs are being lost in China to other non-Tariffed countries. Thousands of companies are leaving. Of course China wants to make a deal. Let them work humanely with Hong Kong first!

The mass protests in Hong Kong began on June 9, when over one million people took to the streets in protest against a government bill that was widely feared would undermine the city’s judicial independence, allowing anyone in Hong Kong to be extradited to China for trial in their weak and corrupt judicial system.

Although the bill was suspended in mid-June, protesters continued their rallies and marches en masse, saying that they would not accept anything short of the bill’s full withdrawal.

They also demanded an independent investigation into the police’s rough treatment of protesters and universal suffrage, among other demands.

The possibility of a violent Chinese crackdown has heightened in recent weeks as armed Chinese police were photographed in Shenzhen, bordering Hong Kong, holding three different drills this month.

Aside from the deployment of armed forces, Beijing used the same rhetoric that had been used to describe the 1989 protests, calling the Hong Kong protests “turmoil.”

This “fueled rumors that another crackdown was being planned,” wrote U.S. Rep. Ted Yoho (R-Fla.), in his recent an opinion article published in The Hill.

Yoho said that public resentment in Hong Kong was more than just against the bill; it was also anger against Beijing’s continuation of a “high-intensity political pressure campaign to subdue dissent within Hong Kong.”

“CCP’s [Chinese Communist Party] true intent is the complete autocratic control of Hong Kong. Not after 2047, but as soon as possible,” Yoho wrote.

He added: “I urge China not to make the same mistake they did 30 years ago in Tiananmen Square by bringing violence and murder into this struggle [in Hong Kong]. The choice is up to China and the Chinese proxy, Carrie Lam. They and they alone can resolve this simply by removing the extradition law.”