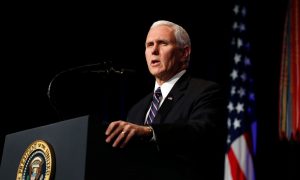 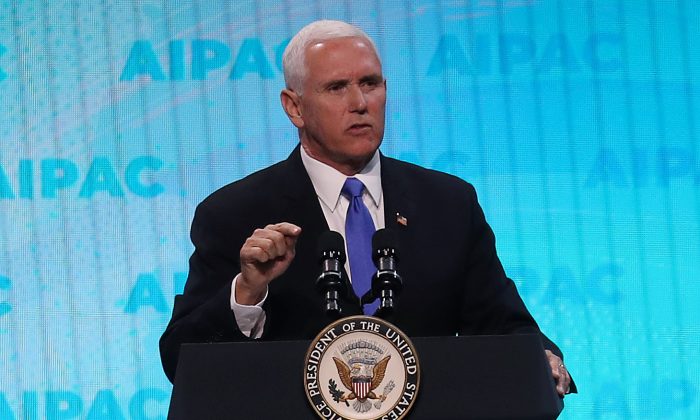 Pence: ‘Anti-Semitism Has No Place in the Congress’

WASHINGTON—Vice President Mike Pence denounced Democrats on March 25 for their stance on Israel and anti-Semitism. He also criticized 2020 Democratic candidates for skipping the annual conference of the United States’ pro-Israel lobby.

“All over the world, anti-Semitism is on the rise—on college campuses, in the marketplace, even in the halls of Congress,” Pence said.

“It’s astonishing to think that the party of Harry Truman, which did so much to help create the State of Israel, has been co-opted by people who promote rank, anti-Semitic rhetoric, and work to undermine the broad American consensus of support for Israel.”

AIPAC made headlines recently when freshman Democratic Rep. Ilhan Omar of Minnesota, one of the first Muslim women in Congress, made controversial comments about Israel.

In a tweet in February, Omar wrote the song lyric, “It’s all about the Benjamins, baby,” and she later suggested that money from AIPAC drove U.S. politicians to support Israel. Lawmakers from both sides of the aisle condemned her comments, saying they play into anti-Semitic stereotypes.

The Somali-born representative sparked another uproar when she said, “I want to talk about the political influence in this country that says it is OK to push for allegiance to a foreign country.”

She also said she supported the Boycott, Divest, and Sanctions (BDS) movement against Israel, contrary to what she voiced during her campaign. She accused Israel of having “hypnotized the world.”

After fierce criticism, Omar apologized but also suggested she was being slated for speaking her mind.

Pence, a conservative Christian, took direct aim at Omar during his remarks, saying that anti-Semitism had no place in the U.S. Congress.

“And, at a minimum, anyone who slanders those who support this historic alliance between the United States and Israel should never have a seat on the Foreign Affairs Committee of the United States House of Representatives.”

Omar was appointed to the committee in January.

The conference brings nearly 18,000 participants to a three-day event in the nation’s capital to advance the U.S.–Israel relationship.

Meanwhile, Israeli Prime Minister Benjamin Netanyahu, who was in Washington, canceled a planned address to the AIPAC. He decided to cut his visit short after a rocket fired from Gaza injured at least seven people and destroyed a residential home in central Israel.

Pence condemned the attack and said, “The United States will never negotiate with terrorist Hamas.”

President Donald Trump hosted the Israeli Prime Minister at the White House on March 25. During his meeting, Trump signed a proclamation that formally recognized Israeli sovereignty over the Golan Heights. The strategic land was seized from Syria in the 1967 Middle East war. No former U.S. president has recognized the land as Israeli territory. In May 2018, Trump also moved the U.S. embassy to Jerusalem.

The leaders of Romania and Honduras followed in Trump’s footsteps and announced March 24 they would recognize Jerusalem as Israel’s capital.

Speaking at the conference, AIPAC president Mort Fridman touted the Trump administration for its policies over the past year to advance the U.S.–Israel relationship.

The Trump administration has imposed tough sanctions on Hamas and Hezbollah, defended Israel from “outrageous assault at the United Nations,” and pulled out from the Iran Nuclear deal, he said.

Critics say Trump’s move to recognize the Golan Heights as part of Israel was aimed to boost Netanyahu’s popularity at home ahead of Israeli elections, which will be in April. Netanyahu faces corruption charges and is locked in a tight fight for re-election. His strongest challenger, according to polls, is former Israeli army chief Benny Gantz, a center-left candidate.