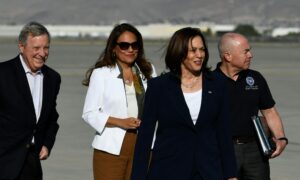 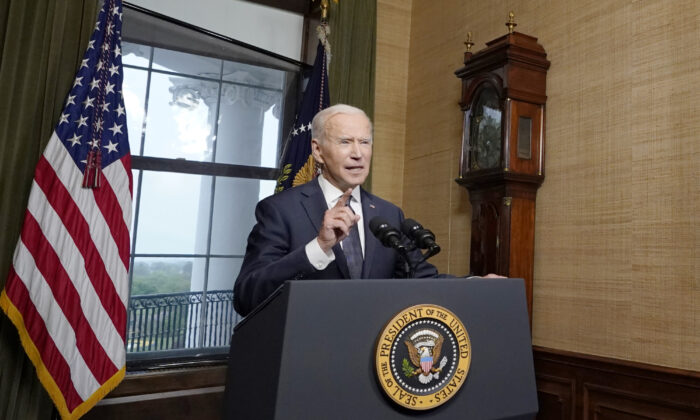 President Joe Biden speaks from the Treaty Room in the White House about the withdrawal of U.S. troops from Afghanistan, in Washington, on April 14, 2021. (Andrew Harnik/Pool/Getty Images)
Viewpoints

Retirement plans warn of a “penalty for early withdrawal.” Might that also apply to the withdrawal of American and NATO forces from Afghanistan?

If you set aside the victory by coalition forces that expelled Saddam Hussein’s overmatched troops from Kuwait in 1991, the United States has not won a war since World War II. Not in Korea, not in Vietnam, and now, says President Biden, Afghanistan is a war we cannot win.

Osama bin Laden predicted we didn’t have the staying power and would ultimately tire of the conflict. President Biden claims “America’s longest war is ending.” It may only get worse, because terrorism knows no state boundaries and does not conduct itself according to classic rules of warfare.

After initially saying nothing about helping thousands of translators, drivers, and others who assisted Americans, Biden has promised to relocate them to a third country while their U.S. visas are processed. That is something we did not do following our withdrawal from Vietnam. Untold numbers of translators and others who assisted American troops were reportedly rounded up by the North Vietnamese and tortured, imprisoned, or killed.

U.S. air power is what largely kept the Taliban at bay. Without it they are re-capturing territories they once held before 9/11 and will again threaten the rights of women and girls to work and attend schools. Watch for a rapid return of the burqa. A generation of young Afghan women born during the last 20 years have had no experience wearing the head-to-toe garment with face covering.

President Biden and former president Trump, who first announced the withdrawal of U.S. forces, have said that America cannot engage in “nation building.” Even recent history has proved that true. The larger question is whether we can defend ourselves against further attacks on this country if Al Qaida regroups and, with the help of Iran, stages another 9/11-type attack, or worse, this time with nuclear devices.

All wars cost money, lives, and limbs. The question is whether the investment was worth it. Did it produce desired outcomes? At best the answer when it comes to Afghanistan is problematic. At worst, it is what The Economist magazine calls “a disaster.”

The Military Times reports on a study by the Cost of War Project, which found that the combined cost of our involvement in Afghanistan is over $2 trillion: “Those funds do not, however, include the amount the United States government is obligated to spend on lifetime care for American veterans of this war, nor does it include future interest payments on money borrowed to fund the war.”

The Cost of War Project also estimates “241,000 people have died because of the war in Afghanistan, which includes more than 2,400 American service members and at least 71,344 civilians.”

Will there be a “wall” to commemorate U.S. deaths? The Vietnam Veterans Memorial still haunts me when I visit it in Washington, D.C. I knew some people whose names are carved into the black granite wall. My name might have been one of them. As an Army enlisted man, I received orders for Vietnam, but managed to get re-assigned, thanks to my position at Armed Forces Radio in New York and contacts at the Pentagon. More than 58,300 others were not as fortunate.

What did we learn from Vietnam? Obviously nothing because we have repeated history in Afghanistan. There was no “end game,” except to hold off the Taliban, an entity motivated by religious fervor that has no intention of quitting.

If Al Qaida regroups and another terror attack is launched against the United States, what will be our response and who will be assigned blame?