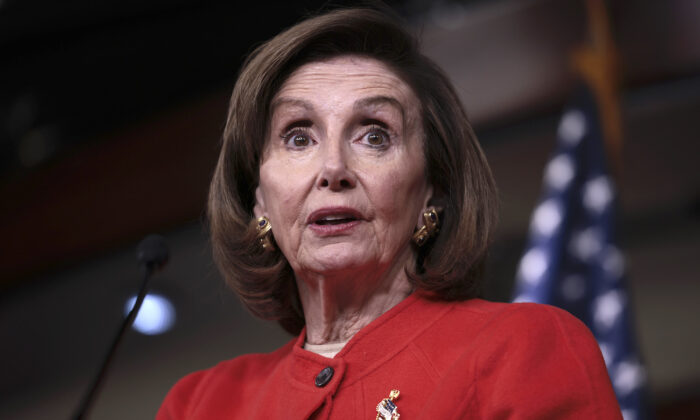 Pelosi Weighs In on Crime Debate: ‘I Don’t Know’ Why Crime Is Increasing

Speaker of the House Nancy Pelosi (D-Calif.) says there’s an “attitude of lawlessness” contributing to rising crime rates across the country, while claiming not to know why it’s happening.

“The fact is that there is an attitude of lawlessness in our country that springs from I don’t know where,” Pelosi said during a Dec. 14 press conference. “We cannot have that lawlessness become the norm. … None of it is acceptable, and it has to be stopped.”

Pelosi’s comments fit into a larger debate between Republicans and Democrats about the reason for increasing crime rates.

Since the summer of 2020, the United States has seen a staggering increase in the number of violent crimes being committed.

For example, FBI statistics show that in 2019, an estimated 16,425 homicides were reported; in 2020, that number rose to a staggering 21,570. Twelve major population centers including, among others, Portland, Oregon; Philadelphia; Columbus, Ohio; Louisville, Kentucky; and Austin, Texas, have broken city records for annual homicides with a few weeks still left in 2021.

Meanwhile, nowhere has the rise in crime been more pronounced recently than in California, where a referendum (Proposition 47) declared theft totaling less than $950 to be a misdemeanor. Under this statewide rule, instances of mass looting and shoplifting have become almost commonplace.

In Pelosi’s home district of San Francisco, such events have become a nearly daily occurrence. On Nov. 22, a crowd of about 40 assailants carried out a string of looting across the Bay Area, marking the third day in a row of such an event.

Partisan disputes aside, one thing is clear to all observers: Crime is on the rise and cities are becoming more unsafe than they’ve been for decades.

While many Democrats have simply stayed silent on the rising crime rates, a few have tried to explain it away.

“We have a terrible crisis in gun violence in the city of Philadelphia,” Krasner ruled.

But according to weekly reports issued by the Philadelphia Police Department, homicides, whether carried out with or without a firearm, are only one type of crime that is on the rise.

While homicides in the city, whether carried out with or without a gun, are up 12.3 percent, several other types of crime are rising even more.

On average, crime across the board has risen 3.7 percent this year under Krasner’s watch.

Republicans Say Democrats Are Responsible for the Lawlessness

The GOP, on the other hand, argues the impetus for the rise in violent crime is clear: Left-wing activists in the Democratic Party and outside of it have used their position to defend crime by decreasing penalties for criminals and refusing to enforce the law through judicial means.

Democratic lawmakers also have put forward several bills to soften the punishment of criminals and the consequences of crime.

For example, Sen. Jeff Merkley’s (D-Ore.) For the People Act, the widest-reaching elections bill of the several that Democrats have proposed, would have forced states to give convicted felons and those actively on parole the right to vote.

Another proposal, Rep. Madeleine Dean’s (D-Pa.) Beyond the Box for Higher Education Act, would have ordered the Department of Education “to issue guidance and recommendations for institutions of higher education to remove criminal and juvenile justice questions from their admission applications.”

In short, the bill would have attempted to make the criminal record of a university applicant irrelevant, denying universities the ability to make a holistic assessment of the character and background of applicants.

More recently, Rep. Rashida Tlaib (D-Mich.) defended a proposal that would have ordered the release of all federal prisoners over the course of 10 years, including drug lords, child predators, and extremely violent or dangerous individuals.

Also contributing to the rise in crime, say GOP critics, is the attitude that many left-wing district attorneys (DA) have embraced toward crime. These disputes made their way into Capitol Hill recently during the confirmation vote for a Massachusetts DA that President Joe Biden had appointed to be the U.S. attorney for the state.

The DA, Rachael Rollins, was shown to have a track record of not enforcing several laws in her county, leading Sen. Ted Cruz (R-Texas) to object to her confirmation.

“Many Americans have probably never heard of Rachael Rollins,” Cruz began. “But they are becoming very familiar with the kind of lawlessness and dangerous crime that radical left-wing district attorneys like [Rollins] have generated.

“Under their watch, we’ve seen looting and larceny and violent crime rates rise in cities all over the country the past couple of years.”

DAs like Rollins, Cruz said, “see it as their job not to prosecute crime, [but] to protect criminals.”

Citing documents he had obtained from Rollins’s time as DA, Cruz revealed that in that position, Rollins refused to enforce several laws, including but not limited to breaking and entering with property damage, threats, resisting arrest, and wanton or malicious destruction of property, possession of an illegal substance other than marijuana, and all possession with intent to distribute charges.

The dispute also is playing out back in Pelosi’s home state, this time in Los Angeles.

“[Gascón] comes into office and decides not to even prosecute the misdemeanors,” Villaneuva said during a press conference. “So you’re doubling down on a really bad idea, and now we’re seeing the consequences of it.”

In Los Angeles, homicides have risen 46 percent and carjackings have jumped 53 percent since November 2019 under Gascón’s time in office.

Responding to this challenge, Gascón defended his tenure as DA.

“It’s not a question of whether I assume responsibility or not. I readily would if I thought there was a correlation,” said Gascón, rejecting the notion that his refusal to prosecute has affected crime rates. “In many ways, we cannot prosecute our way out of social inequalities, income inequalities, the unhoused, the desperation that we have.”