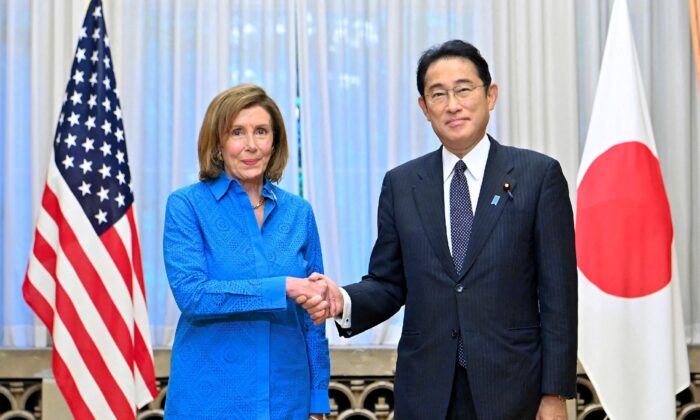 The United States will “not allow” China to isolate Taiwan, U.S. House Speaker Nancy Pelosi (D-Calif.) said Friday during her Asia trip that has infuriated Beijing.

Pelosi made the remarks in Tokyo, Japan, on the final leg of her Asian tour after the Democrat and five other members of Congress arrived in the capital city late Thursday, having previously visited Singapore, Malaysia, Taiwan, and South Korea.

“They may try to keep Taiwan from visiting or participating in other places, but they will not isolate Taiwan by preventing us to travel there … We will not allow them to isolate Taiwan,” Pelosi said.

Pelosi stressed that the visit to Asia was “not about changing the status quo” in the region.

“It’s about Taiwan Relations Act, U.S.-China policy, all pieces of legislation and agreements that established our relationship-have peace in Taiwan Straits and have status quo prevail,” she said. “This isnt about me, this is about them.”

Pelosi also called the self-ruled island “one of the freest countries in the world” and “a great democracy with a thriving economy.”

When asked how she feels her trip to Asia will impact relations between the United States and China, Pelosi said that while it is important that communication is maintained between the two nations, “if we do not speak out for human rights in China because of commercial interests, we lose all moral authority to speak about human rights any place in the world.”

The lawmaker noted that while China has made progress in some areas, it is still a country of “contradictions”  and pointed to human rights issues such as reports of mass genocides.

The Chinese Communist Party (CCP) has been accused of committing genocide and crimes against humanity against predominately Muslim Uyghurs and among other minority groups such as practitioners of Falun Gong, also known as Falun Dafa.

“Again, it isn’t about our visit determining what the U.S.-China relationship is. It’s a much bigger and longer-term challenge, and one that we have to recognize that we have to work together in certain areas,” Pelosi said.

The Chinese regime views Taiwan as part of its territory and strongly opposes Pelosi’s visit and other governments or international organizations forming ties with Taiwanese officials.

The missile launches, which are said to be in retaliation to Pelosi’s visit to the self-ruled island, were reported by Taiwan’s Ministry of National Defense and prompted the Taiwanese ministry to activate its defense system and strengthen its combat readiness.

Japan’s prime minister, Fumio Kishida, on Friday called China’s missile launches a “serious problem that impacts our national security and the safety of our citizens,” telling reporters that Beijing’s recent actions also “have a serious impact on the peace and stability of our region and the international community.”

Meanwhile, there has been international condemnation over the Chinese military’s aggressive behavior in the region following Pelosi’s visit.