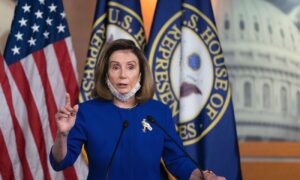 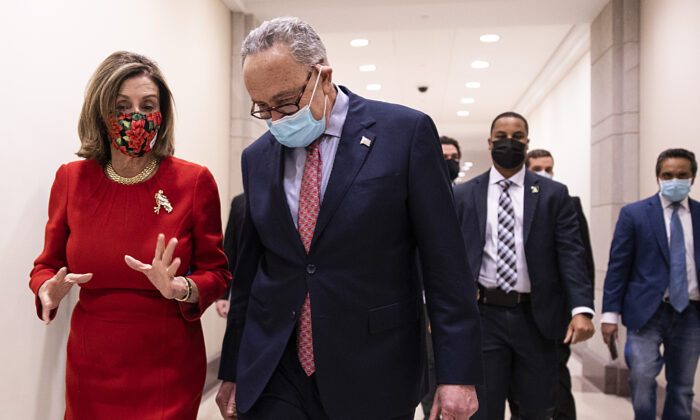 House Speaker Nancy Pelosi (D-Calif.) and Senate Minority Leader Charles Schumer (D-N.Y.) said on Jan. 7 they have not heard from Vice President Mike Pence after calling him and urging him to invoke the 25th Amendment to remove President Donald Trump from office.

Their phone call to Pence comes after thousands of protestors, including a small group of rioters, stormed Capitol on Wednesday and clashed with police as Congress moved to certify President-elect Joe Biden and Vice President-elect Kamala Harris’s election victory.

Five people died amid the protests, including a woman who was shot inside the building by a Capitol Police officer. It is unclear who instigated the breach of the Capitol building.

A score of Democrats have blamed Trump for the incident claiming he incited violence, and have called for his removal, despite the president having urged his supporters to be peaceful and to respect law enforcement.

“This morning, we placed a call to Vice President Pence to urge him to invoke the 25th Amendment which would allow the Vice President and a majority of the Cabinet to remove the President for his incitement of insurrection and the danger he still poses. We have not yet heard back from the Vice President,” the two congressional Democratic leaders said in a joint statement.

“The President’s dangerous and seditious acts necessitate his immediate removal from office. We look forward to hearing from the Vice President as soon as possible and to receiving a positive answer as to whether he and the Cabinet will honor their oath to the Constitution and the American people,” they added.

The 25th Amendment says the vice president and a majority of a president’s cabinet “may by law provide, transmit to the President pro tempore of the Senate and the Speaker of the House of Representatives their written declaration that the President is unable to discharge the powers and duties of his office.”

On Thursday, both Pelosi and Schumer at separate news conferences said they would consider impeachment to remove Trump from office if Pence does not act.

“What happened at the U.S. Capitol yesterday was an insurrection against the United States, incited by President Trump,” Schumer, D-N.Y., said in a statement on Twitter Thursday morning. “This president should not hold office one day longer.”

“The quickest and most effective way—it can be done today—to remove this president from office would be for the vice president to immediately invoke the 25th Amendment,” Schumer said. “If the vice president and the Cabinet refuse to stand up, Congress should reconvene to impeach the president.”

Meanwhile, Pelosi doubled down on her claims that Trump had incited the violent storming of the Capitol building, and the violence targeting Congress, which she said were “horrors that will forever stain our nation’s history.”

“If the vice president and Cabinet do not act, the Congress may be prepared to move forward with impeachment. That is the overwhelming sentiment of my caucus, and the American people, by the way,” the House Speaker said.

Pence, who was in the Capitol on Wednesday as it was attacked, has not commented publicly on the push to remove Trump, to whom he has been loyal to for more than four years. His office hasn’t responded to requests for comment.

The White House on Thursday condemned the violence that took place at the Capitol and assured the American public that there will be an “orderly transition of power.”