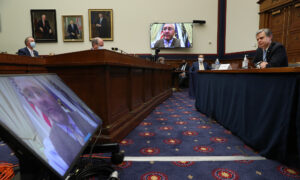 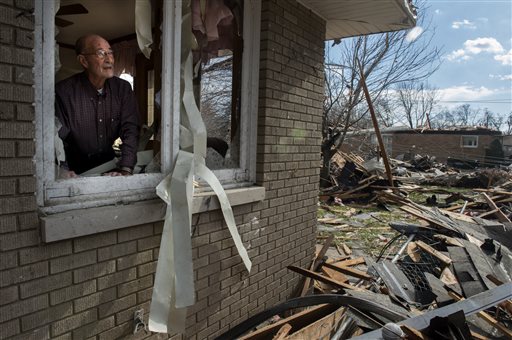 Chuck Phillips looks out at the destruction that tore off part of his roof and left houses around him destroyed after a tornado left a path of devastation through the north end of Pekin, Il.,Sunday, Nov. 17, 2013. Intense thunderstorms and tornadoes swept across the Midwest on Sunday, causing extensive damage in several central Illinois communities while sending people to their basements for shelter. (AP Photo/Journal Star, Fred Zwicky)
US

Pekin, Illinois: Few Injuries, No Deaths After Tornado Touches Down

Few people were injured and none died in Pekin in Illinois on Sunday after a tornado moved through the city.

One Twitter user said that a Pekin resident told her that he’s okay but that there’s “utter destruction” in the town.

Despite the heavy damage reported and seen in pictures from the town, officials at Pekin Hospital told the Peoria Journal Star that fewer than 6 people have sought treatment following the tornado.

Between 35 to 50 homes were damaged in Pekin, with at least several destroyed.

The tornado comes amid a storm system that damaged at least 10 communities across Illinois and Indiana, including nearby Washington and Peoria.

Elizabeth Perkins, 15, and her dad Sean were driving to Pekin from Utica when they heard that the tornado hit; arriving home, they found their home damaged, Elizabeth told the Pekin Daily Times.

“Our garage is completely gone, our windows were blown out, and there are leaves and tree limbs inside our house,” Perkins said.

“But the funny thing is we had a chess game set up, and none of the pieces were moved,” she added, shaking her head. “And there’s a lamp still hanging from the ceiling right next to a wall that was (blown in).”