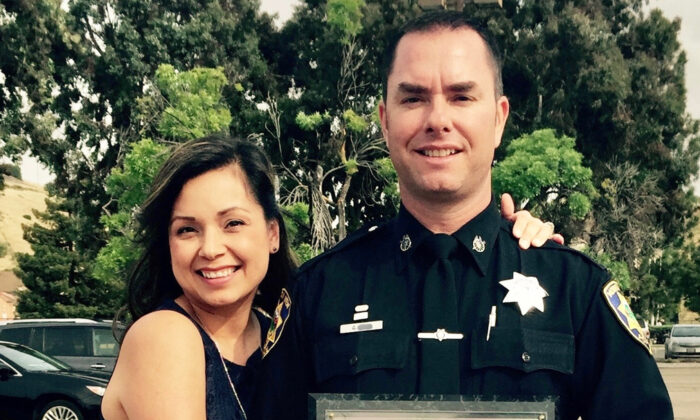 Peace Officer Wives of California was founded in 2017. It has since helped more than 700 families to build a supportive network for wives to learn and help each other navigate a law enforcement lifestyle with their peace officer heroes.

Crystal Ienni, founder of Peace Officer Wives, said she felt it was her calling to create the organization after moving from southern California to northern California with her peace officer husband.

“I realized I didn’t have people around me that I could trust or [who could] support me as I was going through this journey with my husband. And I just felt like the Lord called me to develop an organization that would inspire, educate us, and have us interact as law enforcement families,” Ienni told The Epoch Times.

She said that she wanted to associate with others whom she can connect with.

“Sometimes as a law enforcement family you become reclusive because you become so private for the protection of your officer and your family that you don’t share that part of your life with anybody,” she said.

She described how, for wives of peace officers, it’s common for their support networks to shrink after years of navigating a law enforcement lifestyle. The organization’s goal is to help build those networks.

In recent years, police officers have faced issues such as the “defund the police” movement, California’s rise in crime, and first responders being fired over vaccine mandates. She said that many of these recent developments are now impacting the children of peace officers.

“With these certain movements over the last two years, the children were being harassed or beat up. Or they’ve been losing friends over social media, because those friends that knew that their mom or dad were officers, they were bullying them,” Ienni said. “Usually, before, it was the officer taking in the negative impact from our communities, but now it was the entire family.”

Throughout 2020, the organization’s online workshops attracted wives from around the country. The workshops offered a safe space for people to connect and learn with others who are working through similar situations.

“As a law enforcement family, you’re always private in a sense, because you don’t know where people lie: whether they’re for the police or not for the police,” Ienni said. “We don’t want anybody to have to side one way or the other. We just want friendships and healthy relationships, so in protection of our families, we don’t say what our husbands or wives do as first responders.”

The organization’s motto is “Healthy policing begins at home,” which focuses on the idea that a healthy, positive, and safe home environment can foster healthier mental states among law enforcement families.

Michelle Moon, education coordinator chair of Peace Officers Wives, told The Epoch Times that peace officers have training and debriefing sessions at work to help them process and manage stress resulting from responding to critical incidents. These types of incidents can range from domestic abuse cases to shootings.

Peace Officers Wives seeks to be the training and support for the spouses. Moon said that after a long day on the job, law enforcement officers need a place to return to that is safe and peaceful.

Moon said that critical incidents can be psychologically draining and cause stress in law enforcement officers. One way the organization helps wives is to educate them on when to give their officers space at home and how to work through stress or emotions together.

The organization also helps families in which both spouses are peace officers. Moon and Ienni said that such couples are no different from couples with only one peace officer. They described how women naturally tend to be more nurturing and will often still think about how to care for the children and home, regardless of their occupation.

Moon and Ienni shared that the best feelings are when they see other wives share experiences and build genuine friendships, and when they see them realize that they aren’t alone.