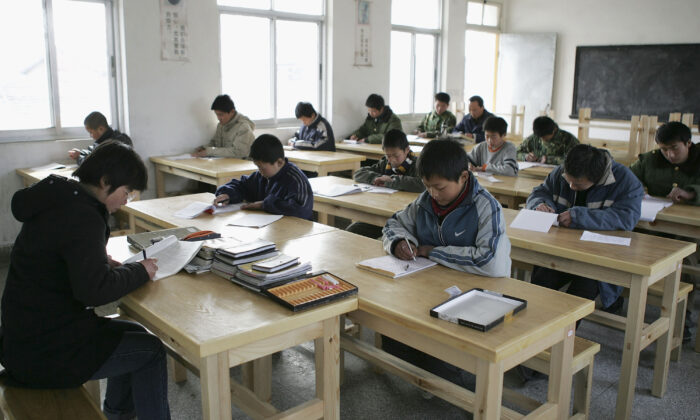 The Chinese regime closely monitors Peace Corps volunteers that are dispatched to China, according to internal government documents The Epoch Times recently obtained.

The Peace Corps is a federal government-run program that sends volunteers abroad to help developing countries in areas such as education, agriculture, and public health.

The Peace Corps China program, which ended this year, was called U.S.-China Friendship Volunteers (USCFV), and was run in cooperation with China’s education ministry.

The Peace Corps started its China program in 1993 and has sent at least 1,448 volunteers to China in the past 27 years, who mainly work as English-language teachers at universities or technical schools.

In reports to the Gansu Province education bureau, local universities revealed that they arranged family and work partners to monitor Peace Corps volunteers and make sure they follow the Chinese regime’s policies.

The Peace Corps China program announced its termination in January. All programs would end in April.

According to the website of the Chinese embassy in the United States, the USCFV worked in western China’s Sichuan, Guizhou, and Gansu provinces, as well as Chongqing city.

In January, there were about 140 Peace Corps volunteers in China, according to Chinese media reports.

The internal documents that The Epoch Times obtained from the Gansu government are reports that local universities sent to the provincial education bureau in the past two years.

These universities reported that the Peace Corps volunteers didn’t finish their two-year term and left China in February due to the CCP virus outbreak in China.

The documents revealed that volunteers were heavily supervised and monitored by school teachers and officials.

“[We] keep on educating the volunteers and other foreign teachers about Chinese laws and regulations, which builds legal awareness among them and helps to avoid any possible political, religious, or other disputes,” read a report from the Gansu Agricultural University dated Dec. 2, 2019.

The Lanzhou University of Technology reported on June 17 this year: “[We] strictly monitored USCFV volunteers to prevent them from preaching their religion on campus, or developing believers,” it stated. The Chinese regime promotes atheist ideology and is suspicious of any faith organizations not sanctioned and supervised by the Communist Party.

“[We] tightly monitored USCFV volunteers when they leave the campus. They only left during public holidays, unless there’s special needs. They reported [to us] before they leave and after they come back. They were criticized badly and would have marks on their records if they returned later than applied.”

Lanzhou Finance University reported on June 18: “Without our approval, the USCFV volunteers cannot participate in any seminar, travel, or other social activities” outside of campus.

The university also explained that it assigned one local family and one ethnic Chinese professor at the school to each Peace Corps volunteer, so that they could ensure the volunteer follows university rules.

The Gansu Institute of Political Science and Law also has similar arrangements. In its report, the school detailed the tasks for assigned professors: checking the volunteers’ teaching materials, the lessons they delivered, and the test papers they designed, and so on.

U.S.-based China affairs commentator Li Linyi said in an interview that Chinese authorities likely do this to ensure that Peace Corps volunteers do not expose American values that the Chinese regime considers a threat to its rule, such as democracy and freedom. “The Chinese regime treats the security of its rule as its first priority. It won’t allow American volunteers to tell Chinese about those free values,” he said.

The Peace Corps did not respond to a request for comment.

Chinese state-run media has repeatedly criticized the Peace Corps organization as a tool for spreading American ideology and culture in China, and that it has a hidden agenda.

For example, state-run website Guanchazhe published an article on Jan. 20 that stated, “the Peace Corps is not an NGO at all. It is a diplomatic project openly led by the U.S. government.”

But the internal reports described in detail the Peace Corps volunteers’ success in teaching students.

For example, the Gansu Institute of Political Science and Law reported that USCFV volunteers taught students English in class, trained local teachers who planned to travel overseas, helped students to participate in English speech competitions, and spent their free time setting up an English club, English movie nights, and other social activities.

“USCFV volunteers played a positive role in the improvement of our school’s English teaching level,” the school report concluded.

One student at Longdong University expressed “deep appreciation” for an English studying center set up by Peace Corps volunteers on campus, according to the university’s report.

The Gansu education bureau reported to the national education ministry in July that “the USCFV program’s achievements are significant…all volunteers have excellent professional ethics. They work hard and with diligence.”