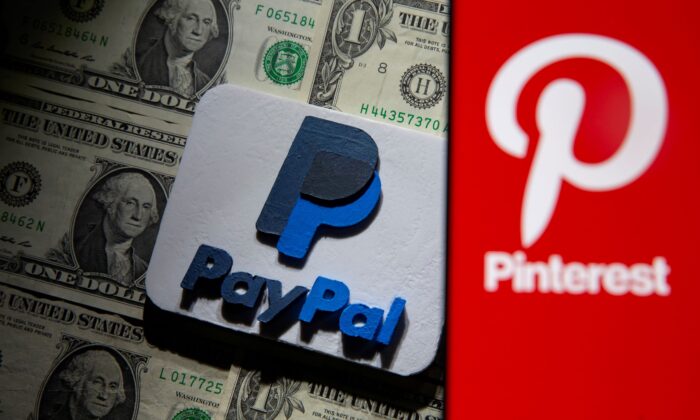 A Pinterest logo is seen on a smartphone placed over U.S. dollar banknotes and a 3D printed PayPal logo in this illustration taken on Oct. 20, 2021. (Dado Ruvic/Illustration/Reuters)
Companies

PayPal Inc. is not pursuing an acquisition of Pinterest Inc. at this time, the payments company said late on Sunday, responding to media reports that it was in talks to buy the digital pinboard site for as much as $45 billion.

Bloomberg News first reported on the companies’ talks last Wednesday that was later confirmed by Reuters. A source at that time told Reuters that PayPal had offered $70 per share, mostly in stock, for Pinterest.

However, sources had cautioned Reuters that no deal was certain and that the terms could change.

The Pinterest deal would have been the biggest acquisition of a social media company at the reported price, far surpassing Microsoft Corp.’s $26.2 billion purchase of LinkedIn in 2016.

It would have also allowed PayPal to capture more e-commerce growth, as more shoppers increasingly buy items they see on social media, often following “influencers” on platforms such as Instagram, TikTok, and even Pinterest.

PayPal, among the big pandemic winners, has done a few takeover deals this year, including its $2.7 billion acquisition of Japanese buy-now-pay-later firm Paidy.

It also acquired Happy Returns, a company that helps online shoppers return unwanted merchandise, for an undisclosed sum in May to bolster its e-commerce offerings and build on its $4 billion acquisition of online coupon finder Honey Science in 2019.

PayPal did not provide additional details in its statement. Both companies also did not respond to requests for comment.

Pinterest is at a crossroads after co-founder Evan Sharp announced earlier this month he would step down as chief creative officer to join LoveFrom, a firm led by Jony Ive, the designer of many Apple Inc. products.