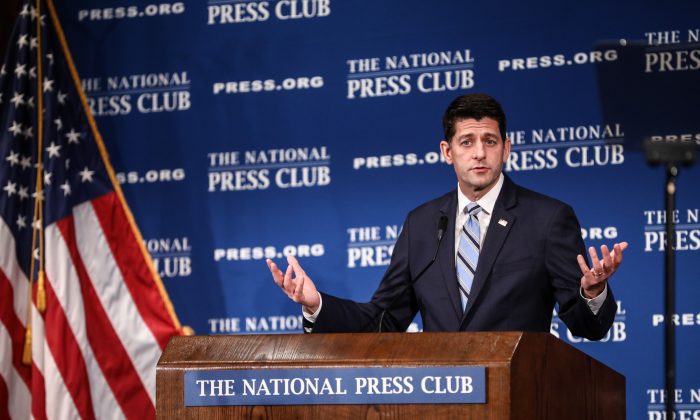 Paul Ryan, Speaker of the House of Representatives, speaks at the National Press Club in Washington on Oct. 8, 2018. (Samira Bouaou/The Epoch Times)
Politics

There are less than 30 days until the midterm elections, and House Speaker Paul Ryan’s name won’t be on the ballot. But that didn’t keep him from speaking on behalf of his Republican colleagues at the National Press Club in Washington on Oct. 8.

Those who listened hoping to find out where Ryan would land after vacating his office in January were sorely disappointed. Other than a joke about mowing lawns and a passing mention of policy work, the speaker continues to be tight-lipped about his next move.

Instead, Ryan took the time with the national press to remind people of the Republicans’ vast accomplishments and to speak out about identity politics.

“As we now enter the height of a very raucous political season, I think it’s a good time to try and step back from all the noise we are hearing these days and try and reflect on where we are,” Ryan said.

Ryan, a self-described “policy guy,” spent much of his 15-minute address reviewing the agenda the GOP rolled out two years ago. Ryan’s delivery didn’t have quite the fervor and passion of a Trump rally, but the message was the same.

“We have planted the pillars of a confident America with this agenda: an economy on the move again, the best military in the world, workers back on the path of life, communities back on the rise, improving people’s lives.”

Booming economy and policy wins aside, many Americans have a bitter taste in their mouths following the vicious confirmation hearing of Supreme Court Justice Brett Kavanaugh. During the Q&A, Ryan was asked about the state of political discourse in America.

“I worry about this a lot,” Ryan said. The incentives in politics, he said, promote invective, outrage, and hysteria.

“The 21st-century technology system we are experiencing, with social media, cable news, ratings chasing, it fuels tribalism and identity politics.”

Ryan said Democrats used to be the only ones guilty of using these tactics, but now even conservatives play ball. He claimed it is dividing our country in ways not seen in a while.

Civil debate about policy seems to have gone the way of the pager, something we all reminisce about, but know is never coming back. But maybe it should, Ryan said.

The speaker dissed Democrats’ single-payer health care proposal during a prior question, but was quick to point out his comments were on the bill, not a person. He noted he still thinks it’s a terrible idea, but would rather stick to substance.

“I’d rather have a really vigorous and vibrant debate on ideas. And talk about an agenda that is uplifting, inclusive, and aspirational, which is what this country has shown promise for so long,” Ryan said. “This is the greatest challenge to those kinds of politics I’ve seen in my lifetime.”