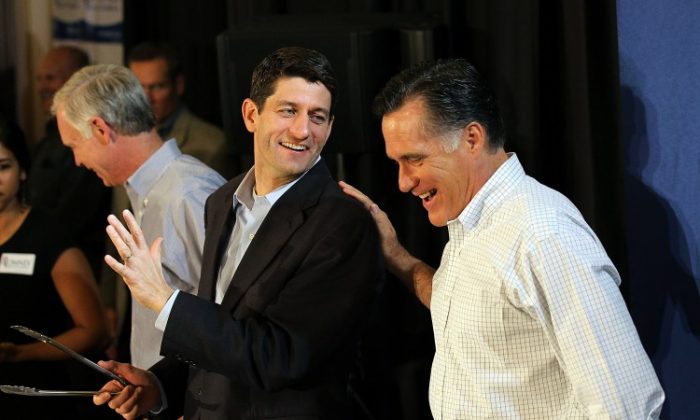 Republican Presidential candidate, former Massachusetts Gov. Mitt Romney (R) jokes with U.S. Rep Paul Ryan (C) (R-WI) during a pancake brunch at Bluemound Gardens on April 1, in Milwaukee, Wisconsin. With less than a week before the Wisconsin primary, Mitt Romney continues to campaign through the state. (Justin Sullivan/Getty Images)
US

Paul Ryan, the Republican congressman whose budget legislation was recently passed in the House, endorsed Mitt Romney for president.

Ryan told the Milwaukee Journal Sentinel that Romney “deserves to be the nominee.”

“I think he earned it. He has emerged as the best candidate,” he said, adding that: “I believe it’s getting to the point where it’s going to become counterproductive if the primary drags on. It’s going to get much tougher to defeat Barack Obama in the fall.”

Ryan also said that in the next week, Romney will likely win in Wisconsin.

“If Romney gets a big delegate count, which I think he’ll get, we believe as conservatives we should coalesce around our nominee and focus on the task at hand, which is the fall election,” he told CNN on Sunday.