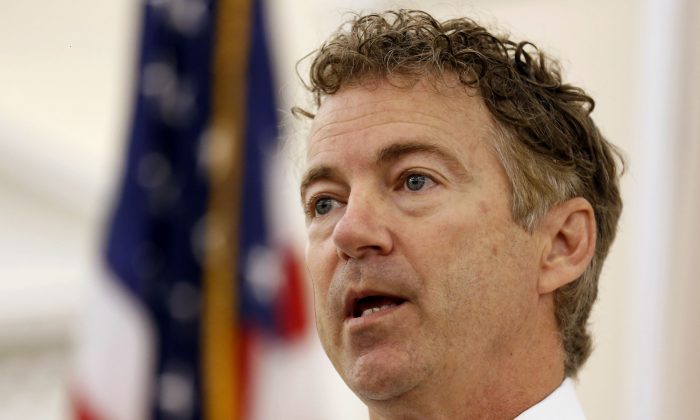 Paul Comes Under Pressure to Focus on Senate Seat

FRANKFORT, Ky.—A defiant Rand Paul is brushing off weak fundraising and weaker poll numbers as would-be donors and home state Republicans push him to abandon an uphill presidential bid to focus on his Senate re-election.

While showing some frustration, the first-term Kentucky senator this week claimed his superior political organization would prove wrong those doubting his chances in the White House contest. At the same time, he released fundraising numbers that place him squarely in the bottom tier of the GOP’s 2016 class over the last three months, a painful symbol of stalled momentum for the libertarian favorite who was considered a major presidential contender earlier in the year.

Despite the early hype, Paul has failed to tap into the national anti-establishment sentiment that fueled his father’s national ambitions just four years ago.

“Rand’s missed his opportunity,” said Gary Heavin, a Texas billionaire who accompanied Paul on a three-day humanitarian mission to Haiti over the summer.

“I wanted to support him because he’s the real deal, but his strategy is just awful,” continued Heavin, the founder of the health club franchise Curves. “He is going to be a very, very effective senator.”

Specifically, Heavin said Paul went after rival Donald Trump so aggressively that he alienated anti-establishment voters who might have supported him.

But back in Kentucky, a growing chorus of Republicans suggested that Paul’s Senate re-election was by no means guaranteed, despite the state’s strong GOP leanings and the lack of a clear Democratic challenger.

“He could lose both positions,” said Patricia Vincent, chairwoman of the Graves County Republican Party. “He just needs to work a little bit more to make sure he still has a seat in the Senate.”

While Paul’s national numbers hover in the low single digits, he continues to divert resources from his Senate campaign to his presidential bid.

Last month, he raised $250,000 to fund a presidential caucus instead of its usual primary. The switch to a caucus, endorsed by the Kentucky GOP in late August, allows Paul to run for president and Senate at the same time.

“While some try to generate false narratives, the only real measure remains a recent vote by the party that fully supports Senator Paul running for both offices,” said Paul spokesman Sergio Gor, noting that three quarters of state party leaders backed the change.

Doug Stafford, Paul’s chief strategist, released a memo this past week citing Paul’s recent straw poll victories in New Hampshire and strong polls from national conservative groups, adding that Paul “always comes in first when people are actually voting.” Straw polls and opinion polls, however, are not the same as actual voting, which begins with the Feb. 1 Iowa caucuses.

“I can’t see what he’s holding out for,” said Casey County Republican Party Chairman William Wethingon. “If I were in his position, I think, looking at the numbers, I think I would focus more on my Senate seat.”

The GOP is deeply concerned about retaining its eight-seat Senate majority. Forced to defend 24 incumbents — seven of them in states President Barack Obama won in 2012 — the party cannot afford to spend money on what should be an easy Kentucky victory next fall. Some fear that his focus on the presidential contest leaves him more vulnerable than he realizes.

Matt Bevin, Kentucky’s Republican nominee for governor, said in a Sept. 30 debate against his Democratic opponent that Paul “would not be the first choice I would make” in the GOP field and “I like Ben Carson” among the contenders.  He amended his comment after the debate, saying Paul would be his choice if he were to endorse anyone in the Republican race — but he won’t be making an endorsement.

Not everyone’s concerned about Paul.

“Nobody thinks that his seat is in jeopardy,” said Damon Thayer, the majority floor leader of the Kentucky state Senate.

He noted that Paul has no Democratic opponent, as the most likely candidates are tied up in re-election campaigns for their state offices. But that election is Nov. 3, clearing the way for a Democrat, such as state Auditor Adam Edelen, to challenge Paul.

With Paul having a nearly perfect attendance record in the Senate, his team suggests he’s been fulfilling his responsibility to Kentucky voters despite a hectic presidential campaign schedule.

His Senate campaign does have a finance and communications team in place, with a plan to begin hiring more staff next month. For now, Stafford is pulling double duty advising both of Paul’s campaigns. Paul ultimately plans to hire a separate campaign manager for his Senate race.

Dave Compton, vice chairman of the Pike County Republican Party, said it’s not time to panic about either one of Paul’s 2016 campaigns.

“Right now I think he’s pretty safe in the Senate,” Compton said. “If he doesn’t turn it around within the next month or month and a half, that would probably be a good decision to make, to drop out.”