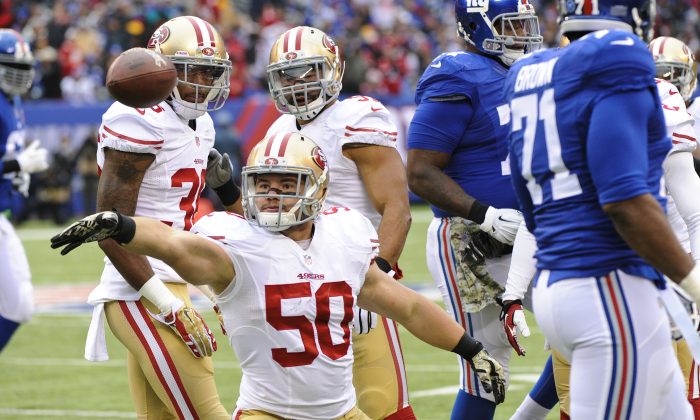 San Francisco 49ers inside linebacker Chris Borland (50) celebrates after intercepting a pass during the first half of an NFL football game against the New York Giants in East Rutherford, N.J., Nov. 16, 2014. (AP Photo/Bill Kostroun)
NFL

Scores of analysts, fans, and NFL players are discussing the surprising decision by Chris Borland to retire at 24 years old.

Borland informed the San Francisco 49ers on Friday, saying he consulted with a host of people including concussion researchers and ultimately chose against risking his future health for present success. “I just honestly want to do what’s best for my health,” Borland told Outside the Lines. “From what I’ve researched and what I’ve experienced, I don’t think it’s worth the risk.”

Borland also spoke with current and former teammates, one of which was likely Patrick Willis. The 30-year-old announced his retirement earlier this month, saying his body couldn’t handle the rigors of the NFL any longer. “I know I no longer have it in these feet to go out there and give you guys that kind of ‘Wow,'” he said in a press conference.

Willis referenced similar concerns to Borland about quality of life for players after they stop playing. “Honestly, I pay attention to guys when they’re finished playing, walking around like they’ve got no hips and they can’t play with their kids. They can barely walk,” Willis said. “People see that and they feel sorry, but they don’t realize it’s because he played a few extra years.

Looking at the number of early retirees in the NFL this month, You’d better believe the Junior Seau story has a lot of people thinking.

Borland was also likely influenced by the other players that announced retirement this offseason, as well as the tragic Junior Seau situation.

ABC later reported that Seau was diagnosed with degenerative brain disease, which is believed to be linked with concussions suffered by pro football players.