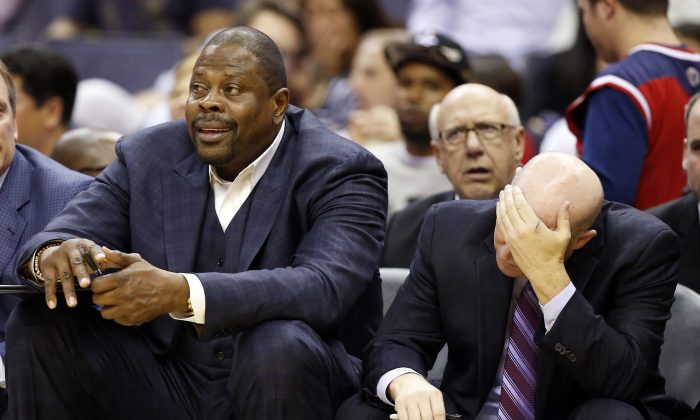 Former basketball great Patrick Ewing is still waiting on someone to give him a shot as a head coach in the NBA.

Ewing, 52, is a Hall-of-Famer who spent much of his 17 years in the league with the New York Knicks. After retiring in 2002, he became an assistant coach for the Washington Wizards. He has held that role on four different teams, currently assisting Charlotte Hornets coach Steve Clifford.

Ewing says that he has only gotten two interviews for head coaching positions since he began coaching, but still has hope that someone will take a chance.

“I’d like the opportunity to succeed or fail like everybody else. I can’t sit around and boo-hoo, ‘They won’t give me an opportunity,'” Ewing told the Washington Post. “I just keep working and keep grinding, and whenever my name is called or somebody decides to give me that call, I just want to make sure I’m ready.”

However, the Post notes that only 18 former players 6’9″ or taller have been given a chance to be an NBA head coach, with Houston’s Kevin McHale the only one currently coaching.

“He’s a smart player. He’s a great leader. But you very seldom hear intelligence associated with height in the NBA or in college. Therefore, they think that the people who are thinking on the floor all the time are guards. Patrick is suffering from that,” former Georgetown coach John Thompson said.

“You know what I respect most of all about him? He didn’t just expect you to just bring him in. He deserves an opportunity to coach. It wasn’t like he took the lazy approach, because my name is so-and-so.”

Ewing said that he is optimistic that he will get an opportunity from someone, despite his name not being near the top of the list for many people. For instance, a slew of names have been linked to the Magic vacancy, but not Ewing.

“I’m still working. I’m still involved in the game. It’s just like playing without being out there scoring, rebounding and blocking shots,” Ewing said. “I’m trying to get better at my craft. For whatever reason it is, be it that I’m a big man, or whatever it is, they feel that a guard is more capable of leading a team. . . . My goal right now is to help the Hornets make the playoffs and, one day, be good enough to win a championship.”