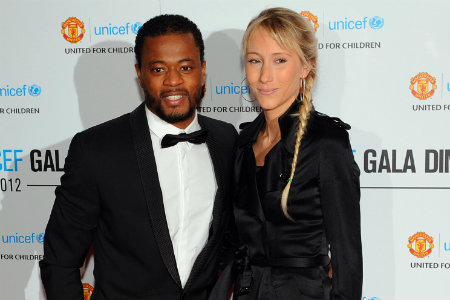 Manchester United's captain Patrice Evra and wife Sandra pose for pictures as they arrive for the 13th annual United for UNICEF charity gala dinner at Old Trafford in Manchester, north-west England on December 19, 2012. The event marks 13 years of partnership between Manchester United and UNICEF and raises funds for the charity to support their work around the world for vulnerable children. (HOWARD WALKER/AFP/Getty Images)
Sports

World Cup 2014 is well underway at the quarter final stage, and fans will be wondering about the wives and girlfriends of the various soccer superstars.

The couple have been met in high school and tied the knot on July 7, 2007, according to FabWags.com.

Patrice and Sandra have been together for 15 years, and have a nine-year-old son named Lenny, and a one-year-old daughter, Maona.