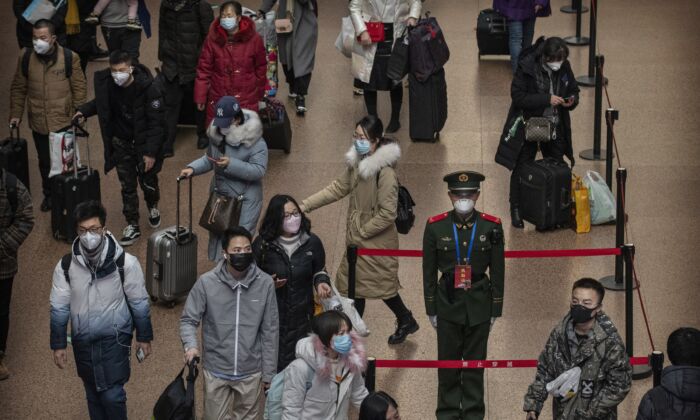 A Chinese police officer wears a protective mask as passengers, many wearing masks also, arrive to board trains at a Beijing railway station in Beijing, China on Jan. 23, 2020. (Kevin Frayer/Getty Images)
CCP Virus

Patients in the Chinese city of Wuhan have been diagnosed with the new coronavirus after exhibiting non-respiratory-related symptoms—such as diarrhea, chest pains, and headaches— according to Jan. 24 report by Chinese researchers reported by local media.

Thus far, official guidance on the symptoms of the Wuhan virus has been limited to fever and symptoms of respiratory illness, such as coughing, difficulty breathing or shortness of breath.

However, according to local media a report by doctors and experts from Renmin Hospital of Wuhan University on Friday noted the appearance of initial symptoms not related to the respiratory system.

It said that many patients who contracted the virus did not have a fever. Therefore simply taking the temperatures of passengers at transport hubs is not enough to screen for the virus.

Other initial symptoms include conjunctivitis, mild pain in the limbs, or lower back pain.

Yu Honggang, professor at Gastroenterology department of the Renmin Hospital, told Chinese state-run newspaper People’s Daily on Jan. 24 about the case of a coronavirus patient his team received who showed new symptoms.

Yu said the patient is a 45-year-old man. He had diarrhea for three days and visited a doctor at a hospital. The man told the doctor he had close contact with a virus patient.

The doctor then arranged a CT scan which found his lungs were infected. He was later confirmed to be infected by the novel coronavirus.

The report quoted Chen Guozhong, a professor at the respiratory and critical care unit of the hospital, that many patients had digestion-related symptoms, and didn’t have any fever or coughing. Chen said it was very hard to detect the disease just by looking at the symptoms.

Chen wanted to alert medical staff that an infected patient may not be showing many symptoms, for example they may only have mild fatigue. But health workers should do more tests to diagnose whether the patient has been infected or not.

On Jan. 22, the Chinese National Health Commission released a diagnosis guidance, listing the main symptoms of the disease as “fever, feeling fatigue, and dry coughing.” It also noted that some patients may have “nasal congestion, runny nose, or other upper respiratory symptoms”

Current interim guidance by the U.S. Centers for Disease Control and Prevention (CDC) says that health professionals should look out for fever and symptoms of lower respiratory illness. The CDC did not return a request for comment by The Epoch Times.

Chinese state-run broadcaster CCTV reported on Jan. 24 that two patients in the city of Tianjin are colleagues of a third diagnosed patient in the city. Neither have been to Wuhan.

State-run People’s Daily reported that out of the official cases reported by authorities in China’s southern Guangdong Province, eight had not been to Hubei Province before (where Wuhan is located), and 27 cases came from members of 10 families.

The report said that one patient who had not been to Wuhan did not have contact with any virus patients. Doctors are currently investigating how that patient was infected.

The novel coronavirus outbreak first officially reported in Wuhan on Dec. 31, 2019, has spread to every region in China except Tibet.