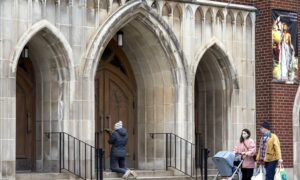 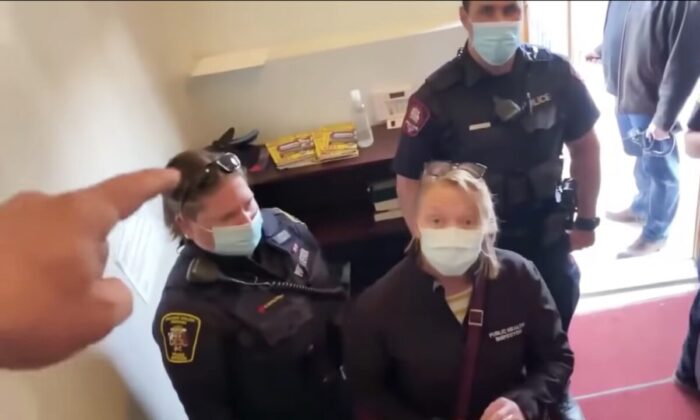 Pastor Artur Pawlowski orders police and public health officials on a COVID-19 check to leave the Cave of Adullam church in Calgary on Holy Saturday, April 3, 2021. (Screenshot Youtube via The Epoch Times)
Canada

Pastor of Calgary Church Undeterred After Kicking Out Police

The pastor of the Calgary church who shared a video on Facebook documenting how he ordered police and health officials to leave his Passover service during the Easter weekend, says police have come to his church doors before but this was the first time they came in uninvited.

“They have been harassing us for 13 months. They have been sending police outside, but it was the first time that they entered the church without being invited,” Pastor Artur Pawlowski said in an interview about the incident that occurred on April 3.

“I’ve told them many times that they have no right to come in, that they’re not welcome to come and intimidate our people, and they did it anyway. They just marched in.”

The cellphone video Pawlowski shot during the Cave of Adullam church’s service—which has since gone viral—shows a six-person entourage that included Calgary city police, bylaw officers, and public health officials having entered the foyer of the church.

When a public health inspector tried to talk to Pawlowski, who has been fined repeatedly for violating public health orders, he refused to converse with her and told the group to leave.

“I don’t care what you have to say. … Out of this property, you Nazis!” he continued. “Gestapo is not allowed here!”

After the officers left the building, Pawlowski commented on video, “Unbelievable sick evil people, intimidating people in a church during the Passover. You Gestapo Nazi communist fascists! Don’t you dare coming back here!”

Pawlowski was born in Poland, which was occupied by Nazis during World War II, then ruled by communist regimes until the collapse of the Soviet Union.

The next day, the Calgary Police Service posted a statement on Twitter that said, “The concern was that the people in attendance were not adhering to the government’s COVID-19 public health orders, which are in place to ensure everyone’s safety.”

“No tickets were issued at the time and it will be up to our partner agencies to determine subsequent enforcement activity in response to this situation. … We do not wish to disrupt anyone’s holidays or religious or spiritual events, however we must support our partner agencies when called upon to help ensure everyone can safely celebrate these occasions.”

The now-famous encounter has left Pawlowski swamped with correspondence.

“I can’t really talk much, OK. This week is going to be crazy. I got literally tens of thousands of messages and phone calls now. I’d gladly talk to you but I need those few days just to clear the craziness,” he said.

“Oh it’s hundreds of radios and TV and Fox News. You name it, everywhere.”

In Edmonton, GraceLife church pastor James Coates led services on Good Friday and Easter Sunday, his second and third services since his release from jail on March 22 for previous violations of the Public Health Act.

Four RCMP cruisers were on the road outside the church as services began on Good Friday. Alberta churches are allowed 15 percent capacity and require mandatory masking and physical distancing between households.

GraceLife refused to meet with Alberta Health Services officials prior to Easter weekend and has consistently defied such orders. No outbreaks have been linked to the church, though a statement on the church website said that in early July, the church learned of two cases, unrelated to each other, where someone who had attended services at the church later tested positive.

One charge against Coates for violating public health orders was dropped and a second will be taken to trial in May. The church as an entity will also be on trial for charges that month.

“The onus is on the government to justify with evidence any policy or health order that violates any of our Charter freedoms, for example, our freedoms to move, travel, associated, assemble, worship,” he told The Epoch Times.

“So in the past 13 months, the government’s not produced evidence to show that lockdowns are necessary or beneficial or doing more good than harm. And governments will need to produce evidence in court.”

According to the Constitution Act of 1982, “The Canadian Charter of Rights and Freedoms guarantees the rights and freedoms set out in it subject only to such reasonable limits prescribed by law as can be demonstrably justified in a free and democratic society.”

The JCCF has ongoing or pending court actions challenging lockdowns in each of the five provinces west of Quebec. In B.C., JCCF representation struck down bans on public protests but did not lift a prohibition on in-person church services.

When it comes to lockdowns, NDP and conservative governments have acted the same, Carpay said.

“There seems to be no correlation between political party stripes and respect for Charter freedoms.”