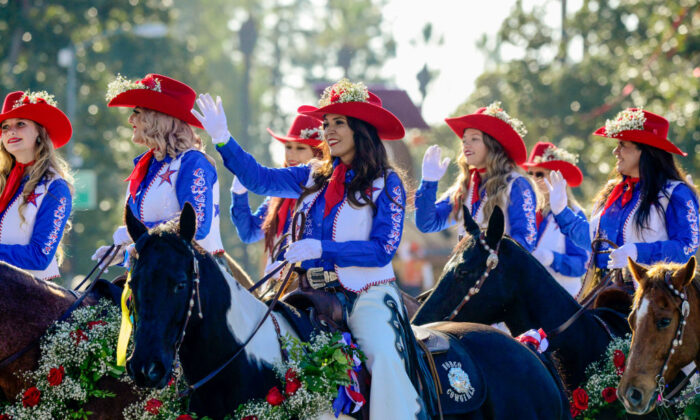 PASADENA, Calif.—After last year’s suspension because of the COVID-19 pandemic, the 133rd Tournament of Roses Parade returned on the first day of 2022 with dozens of stunningly decorated floral floats, equestrian units, and marching bands in Pasadena.

The Rose Parade debuted in 1890 and established a tradition of decorating carriages—now floats with gasoline engines—with thousands of blooming flowers for the new year. Ever since then, the parade became an iconic American New Year’s celebration, attracting hundreds of thousands of spectators who line the sidewalks of Colorado Boulevard to enjoy this grand pageant.

The festival began at 8 a.m. with “Throw My Arms Around the World” sung by Grammy winner LeAnn Rimes. Thirty-seven floats participated in the parade this year, along with 15 bands and 17 equestrian units marching down the 5.5-mile route.

“Education paves the path to success with a world of opportunities achieved through knowledge, compassion and determination. Education is the great equalizer,” said Robert Miller, president of Tournament of Roses Association.

The UPS Store has taken the top honors in the parade three times in a row, with its “Rise, Shine & Read!” float winning the 2022 Sweepstakes Trophy. Illustrating the importance of education, the delivery giant’s 35-foot-tall, 55-foot-long float showcased a rooster family, with a father rooster reading to his chicks.

The Sweepstakes Trophy is awarded to the float with the “most beautiful entry encompassing float design, floral presentation and entertainment.”

Though Los Angeles County Public Health Director Barbara Ferrer suggested that “This might be the year for some people to be watching this on TV” due to the recent uptick of COVID-19 cases, many people gathered to kickstart the new year with friends and families at the spectacular, immersed in the welcoming sunshine after two weeks of heavy rain.

Compared to an estimated 700,000 in-person spectators from around the world in 2019, this year had a smaller crowd.

Some held their place along the route overnight despite the low temperature. Meanwhile, millions of others from all over the world were picking up the good vibes through television live streaming.

Celebrating New Year’s Day with her mother, Stella Yao, a resident of Glendale, enjoyed the parade very much. It’s been eight years since the last time they admired it in person.

“My favorite is the Bachelor float because I like the Bachelor show,” Yao told The Epoch Times. “The floats are great … They are really pretty and colorful, and the marching bands had great music.”

Opening the 2022 chapter with sincere gratitude for those who help, save, and protect others, the onlookers greeted the motorcades of soldiers and front-line workers passing through with loud cheers of “Thank you for your service!”

The parade began from Green Street and Orange Boulevard and traveled north onto Colorado Boulevard before ending on Villa Street around noon.

Until 4 p.m. on Sunday, the floats are on display at Floatfest along an approximately 2.5-mile route at Sierra Madre and Washington boulevards.

To purchase tickets for the post-parade float exhibition and learn more about restrictions, please visit tournamentofroses.com/events-calendar/floatfest/.