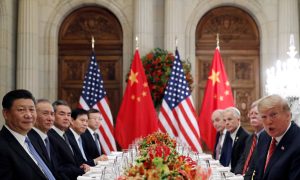 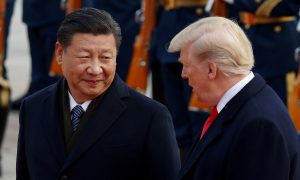 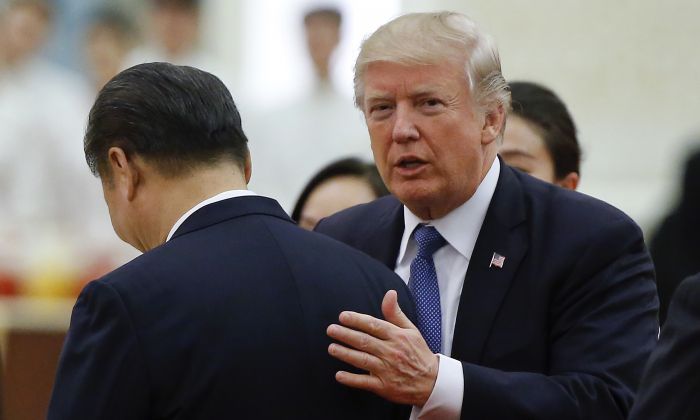 President Donald Trump (R) speaks to Chinese leader Xi Jinping during a state dinner in the Great Hall of the People in Beijing on Nov. 9, 2017. (THOMAS PETER/AFP/Getty Images)
Chinese Regime

Party elders within the Chinese regime are opposed to the idea of making concessions to the United States during trade negotiations, a Hong Kong-based website has revealed.

“Several information channels confirmed that the Chinese Communist Party’s (CCP) elders rejected the big concessions that [Chinese leader] Xi Jinping made in Argentina [during his meeting with U.S. President Donald Trump at the G-20 summit],” according to a Feb. 8 report by the Information Center for Human Rights & Democracy, which cited insider sources.

The Information Center further cited the sources as saying that Xi couldn’t meet Trump before the March 1 trade-negotiation deadline because the Party elders didn’t want Xi to make any concessions.

Even the promises that Xi made in Argentina may not be followed through, the sources said.

On Dec. 1, 2018, Xi promised that China would buy more U.S. products, and would label fentanyl—a deadly synthetic opioid that is often manufactured in China and smuggled into the United States—a controlled substance. So far, China has resumed the purchase of U.S. soybeans since the G-20 trade truce.

There were previous hints of Party opposition.

On Dec. 18 last year, the CCP organized a conference in Beijing on the 40th anniversary of economic reforms initiated during former leader Deng Xiaoping’s rule. Xi gave a speech before Party members, attended by top leadership such as Li Keqiang, Wang Yang, and Wang Qishan, but oddly, no Party elders attended.

Ten years ago, when then-Party leader Hu Jintao held a similar conference to commemorate the 30th anniversary of such reforms, former leader Jiang Zemin, as well as retired elites such as Li Peng and Li Ruihuan, participated.

Whether previous leaders attend anniversary conferences is often an indication of how unified the CCP leadership is.

While former leader Jiang—who heads a faction opposed to Xi’s leadership—didn’t attend Xi’s speech, Xi did mention Jiang by name, among a list of Party members who contributed to the reform era, hinting that Xi may have incurred pressure not to upset the Jiang faction too much.

Shi Shi, a U.S.-based China affairs commentator, told the Chinese-language Epoch Times that Xi may have arranged the absence of Party elders to silence the opposition and prevent the elders from intervening in his rule.

Dissenting opinions within the Party are also evident in the continued delay of the Fourth Plenary Session of the Party’s 19th Central Committee, an important conference where the Party elite decides on upcoming policies, was supposed to be held in autumn of 2018. While an insider told Reuters on Oct. 22 last year that the session would be held in November, it has yet to be held, and no date has been set.

The annual “Lianghui,” or two sessions of the Party’s rubber-stamp legislature and political consultative body, the National People’s Congress and Political Consultative Conference respectively, will commence next month. Another indication that the Party elite can’t reach an agreement over key issues is that the plenary session has not been confirmed, said Epoch Times commentator Zhou Xiaohui. Those issues include the U.S.-China trade war, economic reforms, and officials’ promotions.

Meanwhile, Chen Pokong, an U.S.-based Chinese author and political commentator, told Voice of America in a Jan. 4 interview that his sources in China have said: “[Since the Party amended its constitution in March 2018], the fighting within the Party has exceeded beyond what people can imagine. In some [CCP] meetings, officials are not allowed to take notes.”

Wu Qiang, a former political science lecturer at Tsinghua University, told Radio Free Asia on Feb. 8 that Xi could face a political crisis that threatens his authority if he can’t make a satisfactory deal with the U.S. before the Lianghui commences March 5.

“I believe that those inside and outside of the Congress will doubt seriously Xi’s authority…This worst-case scenario is a huge challenge to the Party’s rule,” Wu said.