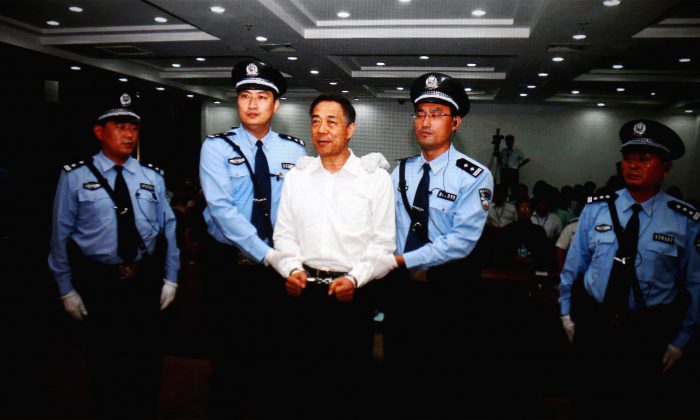 The trial of Bo Xilai was aimed at two others who were not in the courtroom.

Bo Xilai, former Politburo member and Communist Party head of the megapolis of Chongqing, was prosecuted for three offenses, namely bribery, corruption, and abuse of power. Although seemingly significant charges, they were limited in scope.

The bribery charge only addressed Bo’s involvement with businessman Xu Ming, who was Bo’s financial “housekeeper;” the corruption charge was limited to one project in Dalian, known as a “classified public project;” and the abuse of power charge solely focused on Bo’s handling of his former police chief and right-hand man, Wang Lijun, just before Wang attempted to defect.

Speaking of abuse of power, Bo carried out the campaign known as, “smashing the black” in Chongqing, said to be aimed at mobsters. Bo cooked up charges, used torture to coerce confessions, and quickly and harshly cracked down on a large number of political opponents within the Chinese Communist Party (CCP), on private entrepreneurs, and even on lawyers. If authorities had really wanted to investigate Bo’s abuse of power in Chongqing, they would have had plenty of witnesses, physical evidence, and incidents.

However, the authorities chose not to mention any of this, but only singled out Bo’s handling of Wang Lijun before his defection. The outside world later understood why.

Bo said in the trial that he was following his superior’s “six instructions,” so he plotted and spread the message that, “Wang Lijun was suffering from severe depression” and was having “vacation-style treatment,” which led to Wang’s defection. The “superior” here is former domestic security chief Zhou Yongkang.

After the 18th National Congress of the CCP in November 2012, the authorities widely investigated corrupt officials of Sichuan Province and the China National Petroleum Corporation (CNPC)—these people were all Zhou’s former subordinates or trusted followers. Immediately after Bo’s trial, a number of senior CNPC officials were reported sacked. The noose seems to be tightening around Zhou Yongkang.

Regarding corruption, from Dalian, to Shenyang, to Chongqing—all cities where Bo has ruled—who can count how many opportunities he has had? It was easy for Bo to line his own pockets on new projects, especially as the head of Chongqing, whose greater municipal area holds 34 million people.

Bo regularly confiscated private entrepreneurs’ properties, so how much of it ended up in Bo’s own pocket? It is not difficult to get to the bottom of this with a bit of investigation.

But, the authorities chose not to investigate any of this, only charging him with embezzling 5 million yuan (US$820,000) in connection with the “classified public project.” Was Bo so out of his mind that he left other opportunities alone, only targeting a single classified project that would be closely monitored from top to bottom?

People would naturally associate a “classified public project” with military, national defense, intelligence, or high-tech, but the South China Morning Post recently disclosed that this project actually involved a villa that was built for former CCP leader Jiang Zemin.

Why would Bo even think to meddle with Jiang’s villa? According to the South China Morning Post report, based on the CCP’s internal unspoken rule, the Dalian municipal government built the villa for Jiang and then applied for compensation from the central government.

At the time (in 2002), Jiang’s trusted follower, Director You Xigui of the Central Guard Bureau, personally allocated the 5 million yuan (US$ .82 million) fund to Dalian. The court accused Bo of embezzling this money.

However, Bo denied the charge. The sequence of events was more likely to have been as follows: In order to please Jiang, Bo offered to build the villa. Jiang was moved and wanted to return the favor, so he suggested Bo keep the funding from the central government as a personal reward.

Thus, the country lost 5 million yuan (US$820,000) twice—the first was funded by Dalian to build the villa, which became Jiang’s private property; the second 5 million was funded by the central government, but ended up in Bo’s pocket. Since Jiang himself initiated the corruption, Bo could not accept being accused of corruption.

Bo’s court trial was scheduled for two days and later it was extended to five days. The authorities plotted to give Bo more time to make his defense and at the same time spread the trial information with live micro-blogs.

The charge of abuse of authority brought Zhou Yongkang into Bo’s case; the charge of corruption revealed Jiang Zemin’s involvement. On the surface, it looks like things happened by chance, but actually there are more underlying circumstances.

Observing the CCP’s power struggles, it’s hard to estimate how deep the water in its Central Office can be. Xi Jinping, the new leader of the Communist Party, and Wang Qishan, head of the Central Commission for Discipline Inspection, are playing an exquisite show together now. Especially Wang Qishan, who is famous for his cunning and detailed strategies.

Bribery, corruption, and abuse of authority, of the three charges against Bo Xilai, two of them involved top-level officials. Through this, we can tell that the charges were carefully chosen by the person who prosecuted his case.

Nanhua Morning News, the most authoritative English-language newspaper in Hong Kong, has reliable news resources. After Bo’s trial, it first reported that the investigation of Sichuan Province and CNPC aims to get closer to Zhou Yongkang. Later, it exposed the source of the 5-million-yuan embezzlement.

Obviously, Nanhua’s source comes from the Central Office of Beijing. Releasing news strategically has long been a unique skill of the CCP.

Pulling Jiang Zemin’s villa into Bo’s case is like “killing two birds with one stone.” First, it lets outsiders know how extremely luxurious Jiang’s life is. By comparing Bo to Jiang, one can imagine who is more greedy. Second, exposing Jiang while exposing Bo, makes it hard to tell who embezzled the money.

Up until now, Xi Jinping and Wang Qishan’s goal has not been to crack down on corruption or adopt a correct course. Instead, they have sought to strengthen the CCP’s power. As for Zhou Yongkang, they could detain him or send him to jail.

In the case of Jiang Zemin, Xi Jinping’s goal is to impress upon Jiang that he can’t interfere with Xi’s power any more. This is like forcing the old emperor to relinquish his rights and stay back.

In Chinese history, such cases are not rare. During the Warring States Period, the king of Zhao besieged his father in a sand dune, starving him to death. In the beginning of the Tang Dynasty, the prince of Li Shimin controlled military forces and forced his father, Li Yuan, to relinquish his throne.

Xi Jinping was recommended to head the Party by Jiang Zemin, but Jiang and Xi are not father and son. Jiang relinquished his power two generations of leaders ago, but, he still interferes in China’s politics. In order to exercise full power, it is not surprising that Xi Jinping would force Jiang to step back.

Chen Pokong is a Chinese author and political commentator who lives in the United States.

Chen Pokong
Follow
Chen Pokong is a Chinese author and political commentator who lives in the United States.